Walmsley: ‘Mariners will be bold against Victory’

The Mariners have failed to win since the opening round but have been lucky not to claim maximum points over the last fortnight.

On both occasions – against Wellington Phoenix and the Jets – they have dominated but had to settle for 1-1 draws.

But Walmsley praised his team’s commitment especially last weekend when they played more than an hour with 10-men.

“It’s been brilliant. Look at Storm Roux’s energy and continual will, even down to 10 men, he was still breaking forward and still at full capacity trying to get back,” Walmsley said on Wednesday.

“Mitch Austin was the same, Roy o’ Donovan didn’t stop. You can see watching the boys the intent is great and the belief is growing every single session.

“To say I fancy us against Victory would be a bit too bold, they are the best team in the comp by far and they are playing at home.

“But there’s a belief we can go and achieve something. We’ll roll the dice and we’ll be bold.” 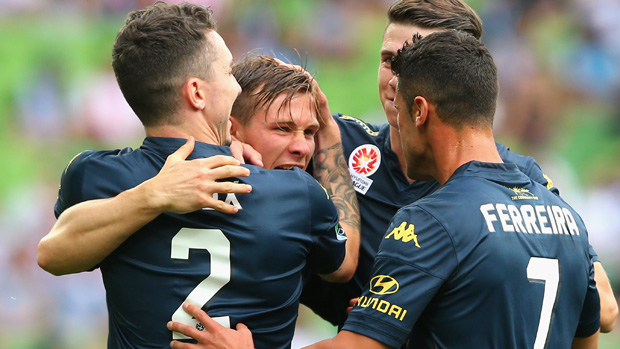 WhileJake  McGing is unavailable, youngster Harry Ascroft is set to return to the side having missed the last few weeks through injury.

And Central Coast will deploy skipper Nick Montgomery at centre-back against Victory in an effort to shackle in-form Besart Berisha.

“The best balance for us is to put experience at the back,” Walmsley said.

“We know Berisha is an absolute handful and we know Monty isn’t going to have any shyness about getting stuck into him.

“I think this gives us the best chance to stifle there [Victory] danger through the middle.

“His [Montgomery’s] range of passing is great so he can switch the ball along the back-four or get a ball straight to Mitch Austin with one 60-yard pass,” the Mariners boss added.

“In transition, if Monty wins the ball back which he does well and bangs it out to Mitch, we know we’ve got some potential weapons there on the counter attack.”