The Central Coast Mariners have earmarked Friday, 12 October as the next potential hit out for Usain Bolt in a pre-season trial match against Macarthur South West United at Campbelltown Sports Stadium. Kick-off is 7:30pm.

Usain Bolt’s journey to become a professional footballer takes its next step, giving fans the opportunity to see the Jamaican sprint king in action against a team of NPL players from Sydney’s South West coached by former Socceroo Nick Carle. 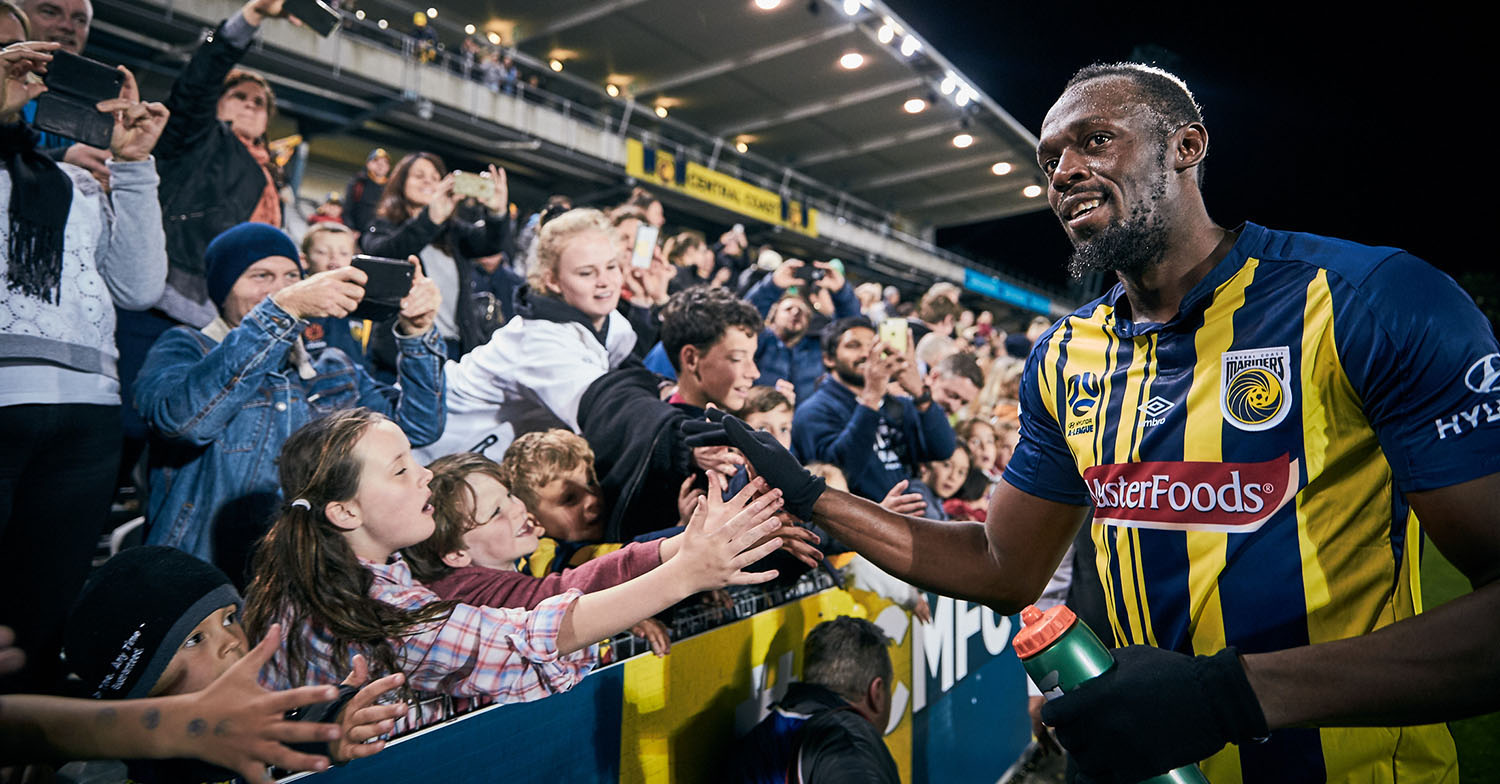 Tickets for the pre-season clash will go on sale via Ticketek from Thursday 27 September (9am).

The Macarthur South West United Football team is a representation of the region’s joint submission to be included in the expanded Hyundai A-League 2019/20 season. The fixture will provide a golden opportunity for the Macarthur South West region to showcase the best talent and passionate football supporter base. 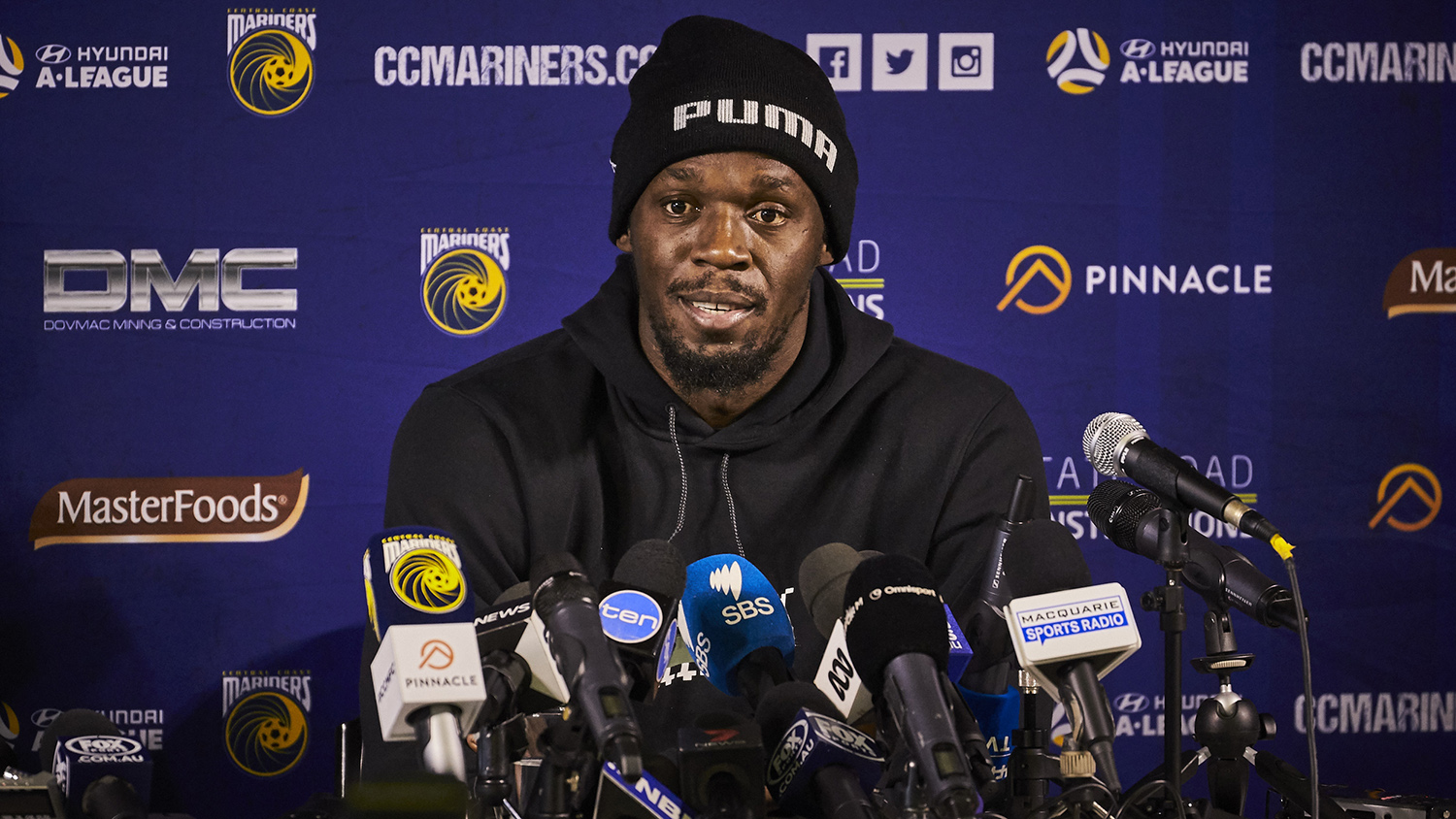 Usain Bolt: Trialist, Central Coast Mariners
“I’m definitely excited and if I get to start it will be a big thing for me,” Bolt said. “It would show that the work that I’ve been putting in is really paying off and the coach has confidence in me – so that would be a big step for me. Playing 45 minutes for me was good, in the last 10 minutes I started to get tired but I pushed through and that’s because of training.

“I feel like I’m improving. My touch is getting better, I’ve got a while to go but with more training and more dedication to my craft I will be fine.

“Getting more minutes in games is the aim. I think that’s the aim for any football player, you want to play as much as you can. For me, I am really looking forward to October 12th and like always, going out there and doing my best. Hopefully my best is good enough.

“For me to score, it would be a big thing. The Central Coast Mariners took a chance on me and the best way that I can pay them back is to score goals. If I could score a goal for this club, that would mean I am heading in the right direction and showing the club that their chance in me is paying off. It would take a lot of pressure off me, as an attacker it’s something that would be good but for me I am just going to work, push myself and hope everything comes together when it matters.

“It’s our duty to give back to charities. As athletes, we benefit a lot from people’s support, as football players we have a voice so we can speak louder than most people. If we can lend our voices to charities such as Shake It Up and make people aware of Parkinson’s disease then that’s something I am privileged to be a part of,” Bolt said.

Welcome to the Mariners Family, Ross McCormack! Here's a taste of what Ross brings to the Central Coast… ?#WelcomeRoss ? https://t.co/nuzq8vFjJE#CCMFC #ALeague pic.twitter.com/IQWVkeyEBs

Mike Mulvey: Head Coach, Central Coast Mariners
“This is an important game in our pre-season, we’re getting into the nitty gritty now,” Mulvey said. “You need to make sure all your preparations are done so that you’re ready to go come round one so this is a very important game.

“It will be a great occasion. It’s a chance for the region to show their passion for football and also an opportunity to cheer on their local players against an A-League opposition.

“Usain is progressing and that’s the main thing. From the outset, we said he needed time, we said we would give him 12 months if need be. A reasonable assumption would be that around January we should be judging where he’s at. We’re going to be ramping up our individual sessions with him over the next few weeks, so he will be given every opportunity,” Mulvey said.

Gino Marra: Chairman, Macarthur South West United Football Bid
“As Bid Chairman, I’m excited to have one of the world’s greatest athletes playing a trial game in our region,” Marra said. “As a Football fanatic, I can’t wait to see Usain do his stuff on the field. It’s also exciting to have the Central Coast Mariners chose our region for Usain’s next game. This is also a great opportunity for our local NPL players not only to play against a Hyundai A-League side but also against one of the world’s highest profile athletes,” Marra said.

Nick Carle: Ambassador, Macarthur South West United Football Bid
“I am jealous I wish I was playing,” Carle said. “How great is this going to be, not just for our community but for the local NPL players dreaming of one day playing in the Hyundai A-League and to say they have played against Usain Bolt is something they will never forget,” Carle said.

Cr George Brticevic: Mayor of Campbelltown
“Watching one of the world’s greatest athletes run onto the pitch in Campbelltown will be a great day for our region,” Cr Brticevic said. “This game is a chance to showcase that our community supports an A-League team playing at Campbelltown Sports Stadium and highlights the merits of our combined South West Sydney bid for a Hyundai A-League license. It’s just further proof that our city is an ideal home for an A-League side and that Campbelltown Sports Stadium is already a proven venue to host these fixtures,” Cr Brticevic said.

Clyde Campbell: CEO and Found of Shake It Up (Charity Partner)
“Shake It Up is proud to be associated with the Central Coast Mariners to help raise awareness of Parkinson’s disease and the impact it has on our community,” Campbell said. “More than 80,000 people are living with this degenerative neurological disease with 20% of them under 50 and 10% under 40 years of age. Shake It Up funds Parkinson’s research in Australia in partnership with The Michael J. Fox Foundation. Our aim is to find treatments that will slow or stop the progression of the disease and ultimately to find a cure. You can find out more about our research and support us by visiting our website www.shakeitup.org.au,” Campbell said.