Thanks to our Match Day Sponsor, Tumbi Tyres & More this Sunday we’re hosting Tim Cahill’s Melbourne City and there is plenty happening to keep the whole family entertained!

Thanks to our Match Day Sponsor, Tumbi Tyres & More this Sunday we’re hosting Tim Cahill’s Melbourne City and there is plenty happening to keep the whole family entertained!

Last time Melbourne City were in town was New Year’s Eve and we were treated to an absolute blockbuster with a 2-2 draw on Gosford’s waterfront.

Like all great Mariners home games, the action starts with our Official Pre-Game Function at the Gosford City Bowling Club.

Thanks to Six String Brewery and Central Coast Leagues Club: doors will open to the Pre-Game Function from 2:30pm which is your best option for a cheap pre-game meal and beverage. Thanks to Gosford City Bowling Club there will be a BBQ in operation that has a menu starting from $3 which includes steak and sausage sandwiches.

Central Coast Leagues Club will also provide a jumping castle for the kids so make sure you bring the family along for a great Sunday afternoon out at Central Coast Stadium.

Thanks to our Match Day Sponsor, Tumbi Tyres & More we’re supporting the Central Coast Mariners Official Supporters Club’s ‘Dress Like a Pirate Day’ and all the kids who attend the match can take part in the Tumbi Tyres & More Treasure Hunt.

Children must report to the Central Coast Mariners Official Supporters Club marquee on Dane Drive to collect their treasure map & free eye patch before embarking on an exciting treasure hunt around the Stadium. Before entering the stadium, kids can also visit the 2GO marquee in Dane Drive to have their FREE pirate face paint applied.

The Central Coast Mariners Official Supporters Club are calling on everyone to get involved with their annual ‘Dress Like a Pirate Day’ and don your best pirate gear on Sunday. The best dressed pirates will be in contention to win the MasterFoods giveaway pre-game.

Tumbi Tyres & More are proud to be a business partner of the Central Coast Mariners and Sunday’s match day sponsor.

So proud in fact that they are giving something away! You can buy four selected Yokohama tyres for the price of three! That’s one free tyre! And for the Chelsea fans you can also choose limited edition Chelsea FC branded tyres for the same price.

You can choose to have your tyres fitted in-store or by one of our mobile vans that come to you for the same price.

Fans on the field – THIS SUNDAY!

This Sunday we’re inviting you to join us for a kick on the pitch at full time!

At the sound of the full time whistle ours fans will have the opportunity to take their photo with the Central Coast Mariners players and have a kick on the hallowed turf of Central Coast Stadium.

If we draw or win, those in attendance will be invited to take part in our family photo with the Mariners players that will be taken at the front of the tunnel where the players walk out. 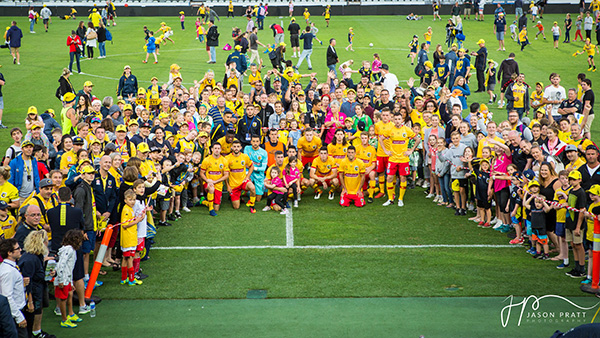