The Central Coast Mariners fired three goals past the Wollongong Wolves in a pre-season trial at WIN Stadium thanks to strikes by Michael McGlinchey, Connor Pain and Matt Simon.

Watch LIVE on Fox Sports as @usainbolt and the @CCMariners
take on @SWSFootball at Campbelltown Stadium on October 12.

It was a quiet opening 15 minutes of play with the first chance of the match falling to Jack Clisby who pulled the trigger on a strike from distance which flew straight into the gloves of Justin Pasfield.

Then, the game came to life in the 24th minute of play when the Wolves took the lead through Darcy Madden with some solo magic which brought the home fans to their feet.

After play evened out in what was a competitive half of football, the Mariners fired twice with five minutes remaining through McGlinchey & Pain. Pain set the first one up and fired home the second to give his side a 2-1 lead at the break. 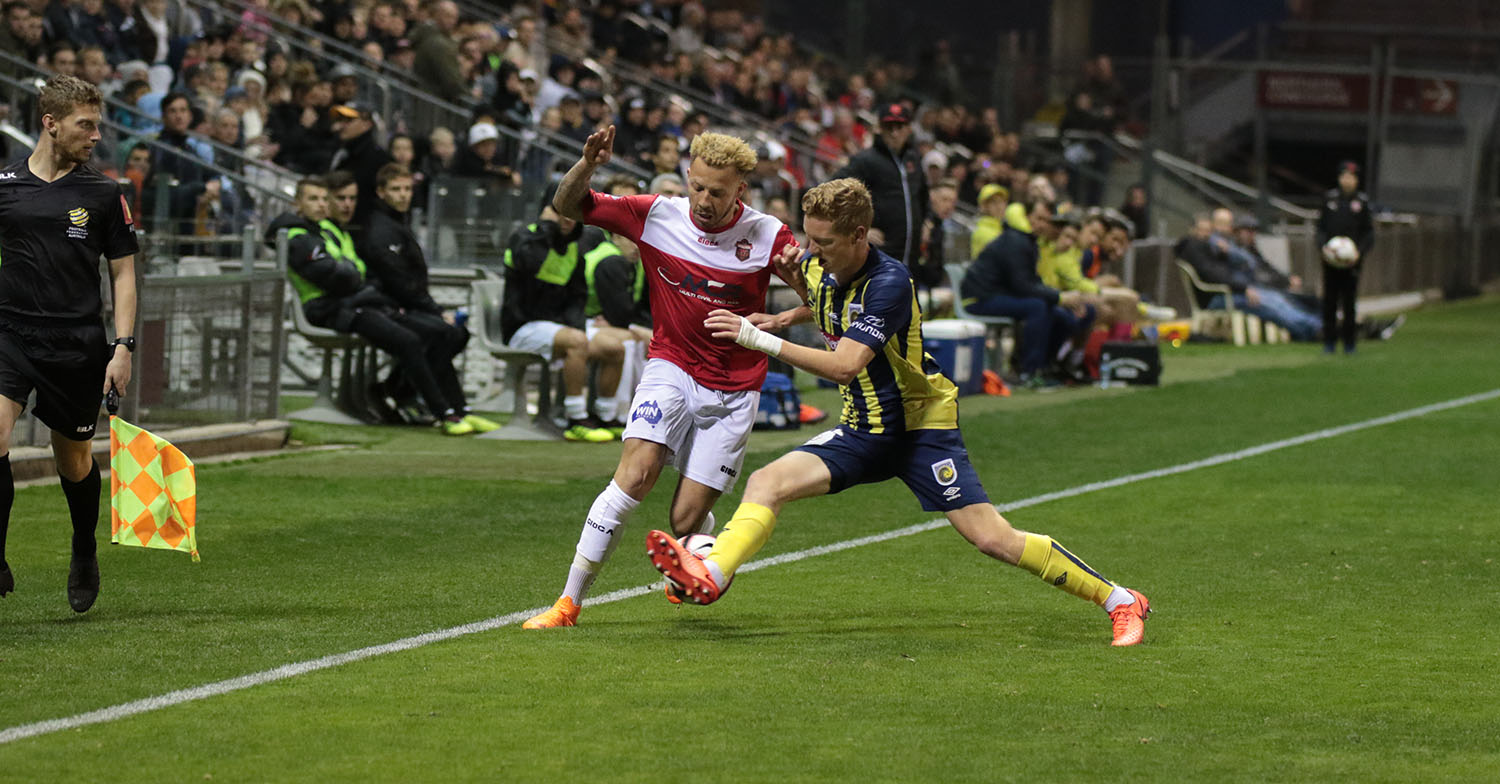 Both sides had a chance each to score again before the half was out but Thomas James was denied sensationally by the post and Justin Pasfield was forced into an impressive diving save to thwart Matty Simon.

The Second half kicked off in similar fashion to the first with both teams trying to get a foot hold on the game.

It was up to the local boy, Jordan Murray who made an immediate impact after substituting on in the 64th minute to set up his side’s third goal of the night that was finished calmly by Matt Simon.

The Central Coast Mariners would like to thank to Wollongong Wolves and Wollongong community for a great pre-season camp in town. Friday night’s match was played out in front of a 3000 strong crowd who created a top atmosphere despite inclement weather.

24’ MADDEN (1-0): Madden grabbed the opening goal of the match with a nice piece of solo work at the top of the box. He burst through the Mariners’ defence and slid his shot into the bottom corner.

40’ MCGLINCHEY (1-1): After Pain danced along the byline and created space for himself he whipped a ball with precision to the feet of McGlinchey who’s first time strike gave Pasfield no chance to make a save.

45’ PAIN (2-1): Pain turned from creator to goal scorer just before the half was out, set up by some sharp attacking Ross McCormack build up. McCormack slid a pass to the feet of Pain who made no mistake with the tidy finish to give his side a first half lead.

69’ SIMON (3-1): Murray made an immediate impact after coming on, flying down the right wing. His ball to the front post found a charging, clinical, Matt Simon. 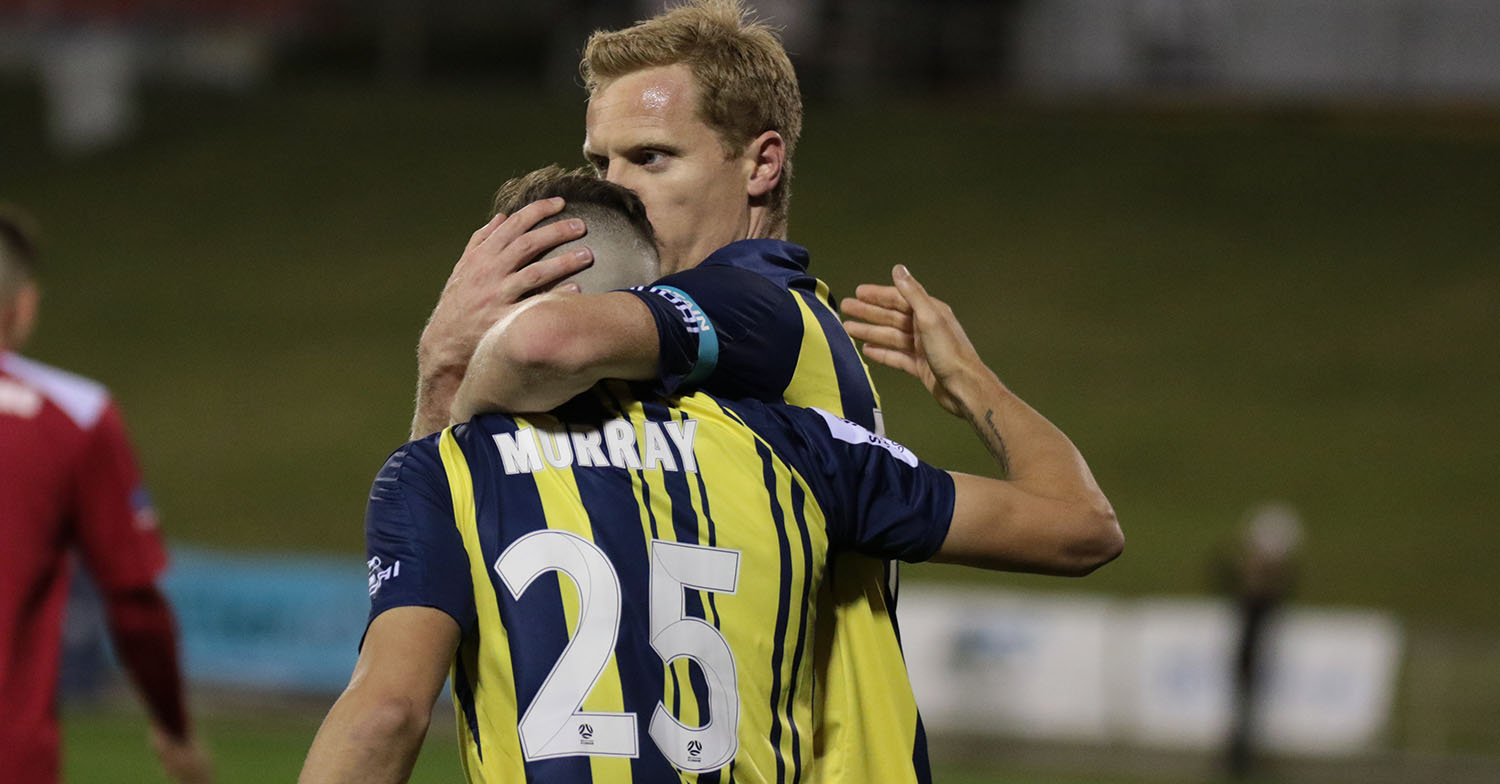 “Winning is a good habit to get into,” Mulvey said. “It became a bit of an FFA Cup tie in the end with the home team taking the lead. What I was really impressed about was that we didn’t cave in. We stuttered a bit but then we found our composure and I thought we saw the second half out well.

“We’ve got two new players who have just arrived so we need to embed them into the team. All in all it was a good hit out but there’s lessons to be learnt.

“The most important thing this season is we’ve got depth. We have the ability to mix the pack. To get that to really gel we need to play a lot of games and we’re very new to it at the moment.

“Matty made a near post run and Jordan Murray picked him out. Jordan is a natural goal scorer but he’s got more to his game than that. We’ve played him on the right a couple of times this pre-season and he’s excelled, I am really excited about him for the future and has shown he has some versatility.