The Central Coast Mariners are proud to announce that former Socceroo and current Mariners’ Head Coach Paul Okon has become a Member of Men of Football (MoF). MoF is a not for profit organisation that seeks to assist football participants in times of need.

Before Tuesday’s training session at the Central Coast Mariners Centre of Excellence, Okon was presented with his MoF shirt by MoF Vice President Mick Morley ahead of this Sunday’s #F3Derby.

Okon spoke about the support that the football family provides to those when they are in need and thanked Men of Football for welcoming him with open arms.

“Becoming a Member of Men of Football means a lot to me and I’m really happy to be a part of it,” Okon said. “The football family is big and it doesn’t only extend to people who are in the game at the moment, if they are struggling it’s great to know that people like Men of Football are there to take the initiative and care for them when needed.

“That support is so important, if you’re in a privileged position and can help, that’s what it’s all about. Men of Football have been responsible for some great initiatives such as supplying defibrillators to every local football ground on the Coast.

“Football is a sport but for a lot of people it’s life and an outlet away from what you’re dealing with and I think it’s a time that people look forward to.

“Whether it’s watching or playing, football always provides a moment of joy in times of need,” Okon said.

Okon joins the likes of former Socceroos Gary Meier and Socceroos Hall of Fame inductee Terry Greedy as well as Newcastle Jets Head Coach Mark Jones. Although Morley said the beauty of Men of Football is that it doesn’t matter which team you support, the football family is always there to help in times of need.

“To have Paul Okon join Men of Football is fantastic for us,” Morley said. “Obviously getting a name like that behind our organisation is sensational. “We have a few former Socceroos involved already in the likes of Gary Meier and Terry Greedy so to have a figurehead like Paul Okon involved is a real bonus to us.

“There’s a lot of rivalry between clubs and players but when something happens the football community as a whole comes together and no matter who you play for or support it doesn’t matter it’s all about the Men of Football helping who needs it.

“To have the support of the Jets and the Mariners is great, Nick Montgomery has been a stalwart for us and so as John Hutchinson who has been great so hopefully we can keep spreading the word,” Morley said. 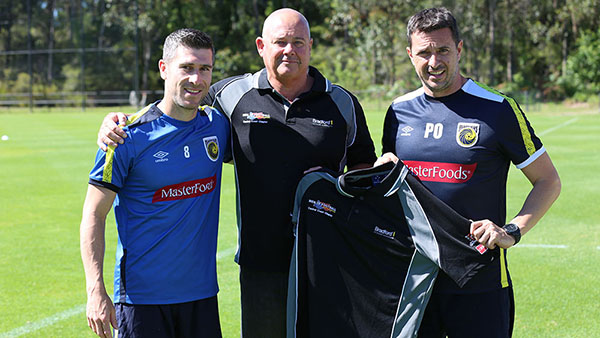