With just two points separating the Central Coast Mariners and Adelaide United, Saturday’s match at Central Coast Stadium is a must win and Connor Pain says the team’s aim is to make a late charge into the top six.

Speaking to media after Tuesday’s gruelling training session at the Central Coast Mariners Centre of Excellence, the young attacker said that the split round has allowed the squad to increase their training load.

“It was a strange week last week as we’re used to training day in day out in preparation for a game on the weekend but it was something a bit different,” Pain said. “We’ve had some time off over the weekend but throughout the week we have been working just as hard as every other week in the lead up to this Saturday’s game.

“If anything, we have been training harder to compensate for the loss of conditioning you get from a match on the weekend so today we had a really hard hit out and a few really hard gym sessions during the week so we are definitely prepared for the weekend,” Pain said.

A resurgent Adelaide United have recorded two positive results in both the Hyundai A-League and AFC Champions League but Pain is confident that the Mariners have what it takes to claim all three points at Central Coast Stadium.

“We are feeling really good and really positive going into this one,” Pain said. “We just need to keep fighting and doing our best. We need some results to go our way but if we keep going the way we’re going the results will change so we just need to keep playing well and get the three points on the weekend.

“People are playing for contracts, we’ve got a chance of making the finals and we need to make sure we put ourselves in the best position possible because as a group we still believe that we can make it and until that’s mathematically impossible we will keep fighting until the end.

“We have had a couple of games in the last couple of weeks that we would have really liked to have gotten points from to put us in a better position. Our push for the six is still on and every game from here to the end is a Grand Final for us

In round five Pain unleashed a nominee for goal of the season against Adelaide United and he hopes to chip in with another against the Reds on Saturday.

“Obviously, I would have liked to have scored more since then but as long as I’m creating chances for the boys around me then I am doing my job,” Pain said. “It would be nice to chip in at any game really so to go out this weekend and score in front of the home fans would be great,” Pain said.

Paul Okon has been blessed with depth in the wide attacking positions this season which has added to the competitive nature at training within the squad.

“There is a really good competition for spots here at the Mariners now and maybe that’s something in the past they haven’t had,” Pain said. “It’s great because every day we come in and don’t know who’s going to start until the day before the game so we push each other every day and just try to get the best out of each other,” Pain said. 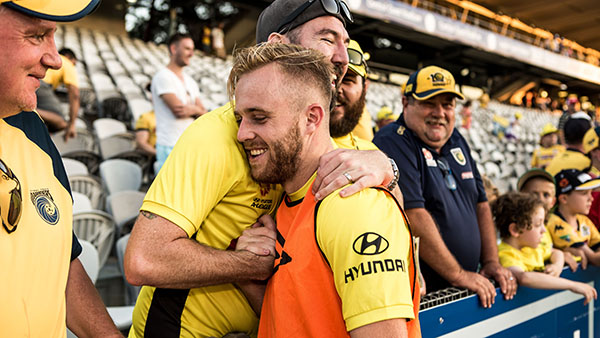 Pain quickly established himself as a fan favourite on the Central Coast and thanked the Mariners’ supporters for welcoming him with open arms.

“I can speak for everyone here that Central Coast Stadium is our home and the fans are quality who always turn out in good numbers,” Pain said. “We really want to get a decent crowd out there on Saturday and try and take the points from Adelaide.

“The fans here have been great to me. From the first game, even the first training session I had people coming up to me telling me how happy they were that I was here and how happy they are to hear that I’ve settled in so it’s been a real privilege to play for the Mariners this season and I can’t wait for the next one after this one finishes,” Pain said.