Pain: “Paolo brings out the best in me”

Pain, who is capped once with the Socceroos and played under Paolo at Young Socceroos level is happy to be reunited with the Mariners’ Head Coach who has the team playing a style of football that suits Pain to a tee.

Against Perth Glory on Saturday night, Pain played a hand in many attacking forays that earned the 22-year-old man of the match plaudits at nib Stadium. 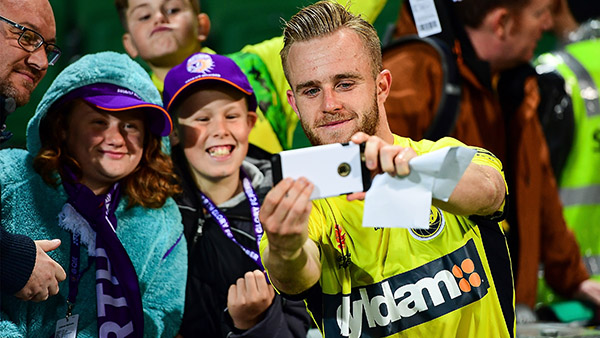 Speaking after the team’s training session on Tuesday, Pain said that the comeback from three goals down wasn’t a surprise for the Mariners who kept the belief right through until the final whistle.

“It’s nice to surprise our fans in a positive way but to us it was no surprise,” Pain said. “Obviously after half time we still came in having played OK with the ball and Paolo said straight away if we can get one, we will quickly get another.

“So as soon as we had the one we started to see that we had a lot of time and we all believed so it wasn’t a surprise.

“After the game Paolo was happy with the way we fought and that’s the way we are up here, the fighting spirit has been drilled into us and to prove some of the doubters wrong in the first round is the first step,”

“Paul [Okon] and I worked together in the Young Socceroos, so it’s been good to see him come here.

“He brings out the best in me, the way we are trying to play suits me to a tee, the wingers are expected to stay high and wide and I like making those runs in behind the defence,” Pain said.

For Connor Pain, his transfer to the Central Coast is the first time the young attacker has lived away from his family in Victoria and says that his teammates have made the transition easy.

“It took some time to adjust to the completely different way of life but I’m really excited to be up here,” Pain said. “I’m really starting to link up with the boys and there is a great bunch of lads.

“We pride ourselves as being the big family club and it’s really refreshing to be a part of,” Pain said.