Two-goal hero Roy O’Donovan says Sunday’s win over the Wanderers was Central Coast’s best of the Hyundai A-League season and shows the increased maturity in the Mariners side.

Paul Okon’s side produced a superb second-half display to stun Western Sydney 2-0 at Spotless Stadium thanks to O’Donovan’s brace.

It was the Mariners’ third win in a row – the first time they’ve managed that in three years – and they are now just two points outside the top six heading into the last eight rounds.

And while O’Donovan’s goals – he now has 10 for the campaign – have been vital, the Irishman says the improvement in the youngsters in the squad has been the reason for the club’s turnaround.

“Last year we were kids fresh out of the womb,” O’Donovan told Fox Sports.

“They are the reason we win games, not me. I score every game I get chances but last year we were conceding three and four goals, this year it doesn’t look like happening. 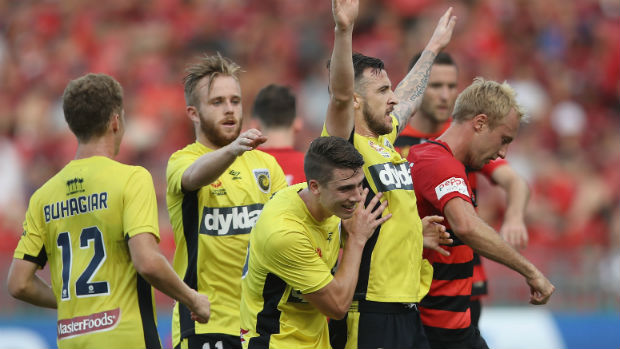 O’Donovan paid credit to Okon for his influence on the side since taking the reins just before the start of the season.

The Mariners managed just three wins in all of last season to claim the wooden spoon.

But under Okon they have not only improved their play and tightened up at the back, but are winning games and starting to believe they can play finals.

“He’s [Okon] been great since he came in…he’s a great coach,” O’Donovan said of Okon.

“He really gets his point across and you can see that in the performances. It’s a joy to play with these lads.

He added: “It’s definitely our best result and a clean sheet as well, our third of the season.

“The first half maybe our final pass let us down but we kept them quiet…we nicked two good goals and I think we were worthy winners.”

The Mariners are in action again next Sunday as they host Melbourne Victory in Gosford.