One young local player who is excited to see Westfield W-League action arrive on the Central Coast this Sunday is Mariners Academy Member Shania Stolz who was lucky enough to meet Roy O’Donovan, Anthony Caceres and Jake McGing at today’s training session.

Starting her football at Terrigal United FC just three years ago, Stolz played for the Central Coast Football NPL team last season and is currently trialling to be a part of the new-look Mariners’ Academy for 2016.

With Canberra United and Melbourne City set to face off as a curtain raiser to the Mariners’ Hyundai A-League hit out against Wellington Phoenix, Central Coast locals have their first of three chances to see elite women’s football on the Coast. 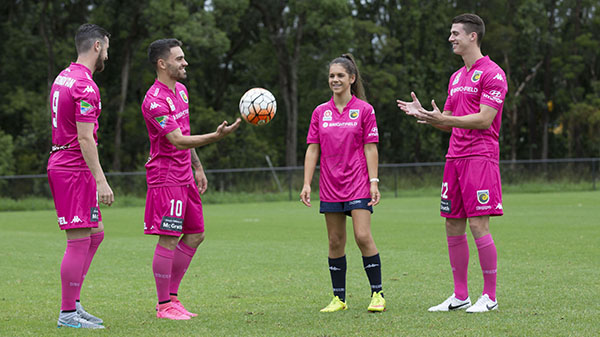 The Central Coast Mariners PINK KITS to be worn on Sunday are available for bidding in a LIVE AUCTION now! All proceeds go to Cancer Council NSW.

Stolz hopes that one day, the Central Coast will have a W-League team of their own but for now, can’t wait to see the Wesfield W-League women in the flesh on Sunday.

“It will be such a huge opportunity for all the girls on the Central Coast who play football and give them something to work towards and aim to play in the W-League,” Stolz said. When we get to see the W-League girls play on the Coast I also think it will be great for promotion of the game in our local area maybe even influence more girls to play the game.”

“I used to play netball as a kid for many years and school soccer when I was younger, but a good friend of mine asked me to come join her soccer club at Terrigal.

“That was about 3 years ago and now for the last 2 years I’ve been playing rep soccer for the Central Coast.

“I started out in the U15s then continued to reserve grade but have worked my way up to playing in first grade at the end of last season so hoping to keep continue on next season.

“Hopefully one day on the Central Coast we can have our own W-League team which would allow more local girls to compete at higher levels but also the people on the Coast would have another local team to support and watch.”