The Central Coast Mariners have locked in a pre-season date with their old foes, Newcastle Jets to be played on Sunday 20 September at Wade Park, Orange.

Thanks to the support of Orange City Council, the Mariners will face the Jets as a part of their western road trip that will include a raft of community engagement initiatives.

Orange City Council also have a range of accommodation deals available by CLICKING HERE. Tickets are available for purchase by calling 6393 8111.

The Mariners have an established relationship with regional Australia in the form of a Central Coast Mariners Academy Squad (Western Region) who the Hyundai A-League Mariners squad will also play whilst they’re in town.

Central Coast Mariners CEO Shaun Mielekamp enforced the importance of the Mariners’ relationship Western NSW and the significance of the community element to the trip.

“The Central Coast Mariners are really excited to be spending the week in Orange and we would like to thank Orange City Council for hosting us; without their support we could not have made this trip with such a strong focus on community.”

“The Mariners have a strong focus on community and this is a mantra that we take with us, wherever we go. Whilst we’re in Orange the full playing squad will be running training sessions with local junior players along with a host of other community activations that will be announced shortly.

“We have found a strong connection and support for the Mariners right across regional NSW. The synergy of being a club based in a regional city means that we understand that we cannot just simply drive in and out of town, we are passionate about delivering to the community and intend to form partnerships that will see us return.”

“For the football fans in Western NSW our trip presents several opportunities to not only see a Hyundai A-League team in action on the field but also meet and interact with them off the field which is something that can be difficult for other franchises to bring to town, but this community engagement is very important to us,” Mielekamp said. 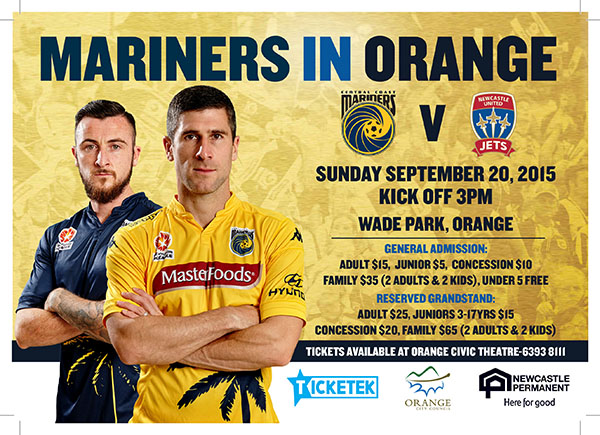 Orange City Council Sports & Recreation Committee chair, Cr Jason Hamling is looking forward to hosting the Mariners and Jets in what will be a bumper weekend of sport in Orange.

“We are delighted to confirm that Orange will be hosting two of Australia’s top Hyundai A-League sides. This is fantastic that top-flight football games are being played in regional centres and it’s great news for the hundreds of local junior players who’ll get to experience a top – level game,” Cr Hamling said.

“Long-time football watchers in Orange will remember back to July 2006 when Wade Park hosted a pre-season clash between the Mariners and Adelaide United.

“More than 4,300 spectators turned out to watch a local lad, one Nathan Burns, who was just breaking into Adelaide’s top team. Now Burns has starred for the Socceroos, won the Johnny Warren medal and is playing for F.C. Tokyo in Japan. I’m sure locals will be keen to come along and look out for the next generation of stars to emerge,” he said.

The Central Coast Mariners also returned to Orange in 2007 to take on Queensland Roar (now Brisbane Roar) at Wade park to play out a 1-1 draw in front of more than three and a half thousand fans.

For more information please contact CCM HQ ON 4353 7200 or via e-mail info@ccmariners.com.au

Further details in regards to community activations in Orange will be announced in due course.

NOTE: To keep prices as affordable as possible, tickets are available ONLY at the Ticketek​ office in Orange or via phone on 6393 8111.