The Central Coast Mariners are set to acknowledge the tireless efforts of Surf Life Saving Central Coast (SLSCC) by trading their iconic yellow kits for a football take on the traditional red and yellow patrol uniforms for our next #F3Derby at Central Coast Stadium THIS SUNDAY!

SLSCC & the Central Coast Mariners have worked hand-in-hand for several seasons and the relationship will be highlighted when the team steps onto Central Coast Stadium to take on the Newcastle Jets in their unique Surf Life Saving inspired football kits.

The SLSCC KITS ARE ON SALE NOW, CLICK HERE TO PURCHASE. 10% of the limited edition kit sales will go back to SLSCC, available in both adult and kids sizes (only while stocks last). 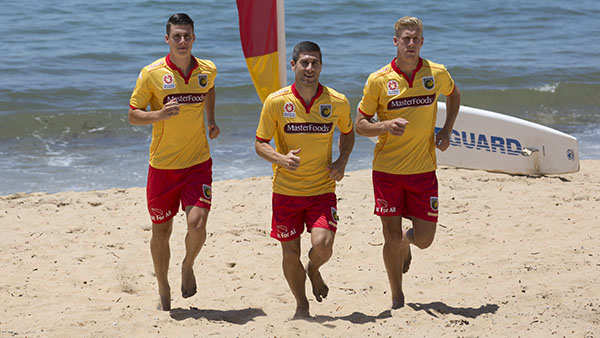 Without the dedication and hard work of SLSCC’s volunteers, the residents of the Central Coast and visitors from afar would not be able to enjoy our beautiful beaches.

During the 2014/15-summer season the SLSCC volunteers saved a whopping 1779 lives on our Central Coast beaches and prevented a further 29,664 swimmers from getting into difficulty.

There are 15 Surf Life Saving Clubs on the Central Coast ranging from ‘The Lakes’ (north) down to Umina on the Coast’s peninsula.

At the media launch of the Central Coast Mariners Limited edition SLSCC kit , Nick Montgomery, Josh Bingham & Jake McGing were on hand to model their new colours at Terrigal Beach.

As always, through out this summer the Central Coast Mariners will be promoting a range of beach safety messages including always swim between the red and yellow flags, Use 30+ sunscreen, wear a shirt and hat and keep the beach clean by putting your rubbish in the bin. 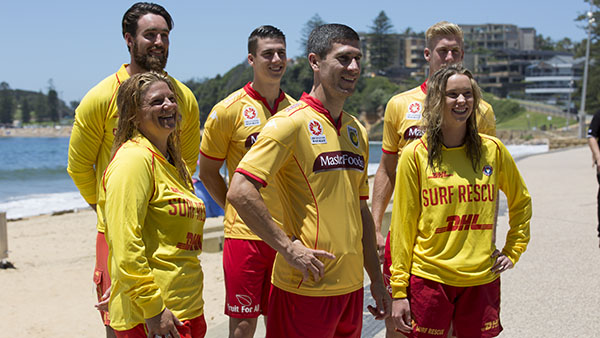 Central Coast Mariners’ CEO Shaun Mielekamp was thrilled that the club could support one of the Coast’s most iconic organisations by donning their colours during a Hyundai A-League home match.

“We couldn’t be more proud to show our support towards SLSCC, they are an enormous part of this community and whilst we play football, they save lives,” Mielekamp said.

“Living in the Central Coast, I can truly appreciate the tireless efforts and energy of the surf life savers who not only keep our beaches safe but are also teaching my boys who are in nippers vital surf survival skills whilst having a great time.

“We anticipate the jerseys will sell out immediately and we will be doing everything we can to stock and raise as much money and awareness for Surf Life Saving Central Coast,” Mielekamp said.

“It’s fantastic the Mariners have dedicated their home match against the Jets to Surf Life Saving to recognise the valuable contribution volunteer lifesavers provide to the Central Coast community and to assist in raising awareness of vital beach safety messages,” Parker said. 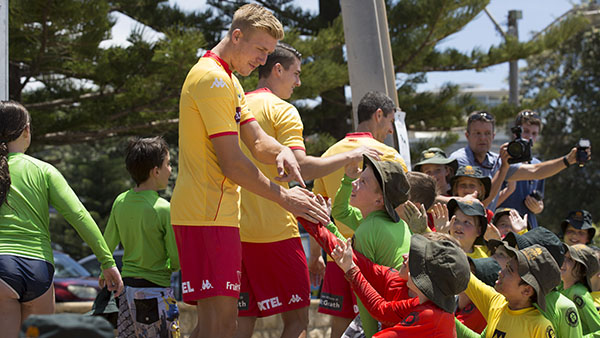