NEWS: Caceres set for test in the west

Talented #CCMFC midfielder, Anthony Caceres is confident heading into Saturday’s match up against Perth Glory that the Yellow & Navy can bounce back at nib Stadium. K.O. is 9:40pm AEDT live and exclusive on Fox Sports 505.

Talented #CCMFC midfielder, Anthony Caceres is confident heading into Saturday’s match up against Perth Glory that the Yellow & Navy can bounce back at nib Stadium. K.O. is 9:40pm AEDT live and exclusive on Fox Sports 505.

At just 23-years-of-age, Caceres has grown into a leader amongst a young Central Coast Mariners line up and has started all nine matches during the Hyundai A-League 2015/16 campaign.

Crafty Caceres has a knack of picking up possession more than most and sits third in the league for total number of passes, behind Corona & Isaias. Although Caceres sits just behind the two Spaniards in total passes, the former Marconi Stallion boasts a higher percentage in accuracy.

Speaking with media before departing with the team to Western Australia, Caceres touched on the importance of hitting Perth from the get go and praised the #CCMFC youngsters.

Caceres also reflected on the previous week in training and how the team had used a much needed 10-day-turnaround to prepare after the side’s tough loss to Melbourne City. 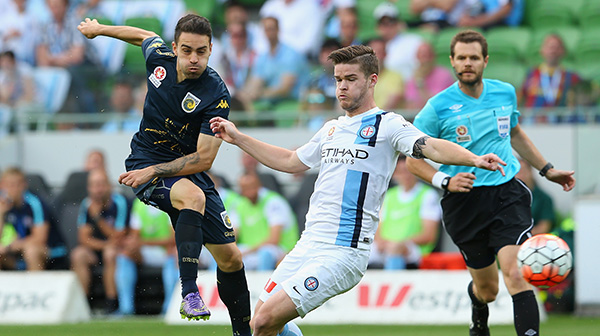 “The loss hit us where it hurts, a defeat like that at home is never easy but lucky we’ve got a good group of boys who always stick together and we’re looking to rectify our mistakes and improve on last weeks’ performance,” Caceres said.

“You get time during the week to reflect on your performance, the good and the bad, you’ve got the week to work on what you need to work on, we’ve done that and we’re looking to go to Perth with a positive frame of mind and put on a good performance.

“We need to start the game with the mentality that we’re going to win, we’re fit enough to do so and we’re looking to do that right from the beginning this time around.

“We have a very young team but we’ve got a good group of senior players who bring the young boys through, keep their heads up and keep driving standards at training.

“The young boys here are switched on, they’re here to improve and they know what we need to do to get better.”

“I like to take leadership when it comes to creating play and in tough times trying to create a chance so we can get back into the game.”