18-year old Central Coast local, Trent Buhagiar has signed a contract extension with the Mariners that will see him remain in Yellow & Navy until at least the end of the Hyundai A-League 2016/17 season.

18-year old Central Coast local, Trent Buhagiar has signed a contract extension with the Mariners that will see him remain in Yellow & Navy until at least the end of the Hyundai A-League 2016/17 season.

Central Coast Mariners CEO Shaun Mielekamp announced the contract extension of Buhagiar at the 2016 Brightfield #MarinersMedal in front of a 300 strong crowd at Crowne Plaza Terrigal on Friday evening.

After signing his maiden Hyundai A-League contract in the 2016 January transfer window, the flying winger went on to make five appearances in Australia’s top flight.

The Umina Eagles junior developed his game at Kariong’s International Football School and is currently plying his trade with the Central Coast Mariners Academy during the Hyundai A-League off-season.

The entirety of Buhagiar’s football career has been played on the Central Coast that started with Umina when he was just four years old.

The Umina junior climbed the tiers of local football before making the progression to representative level and was the first, of hopefully many players to sign a professional contract from the International Football School.

Amongst all of the football he is playing, Buhagiar is also undertaking his Higher School Certificate at the International Football School. 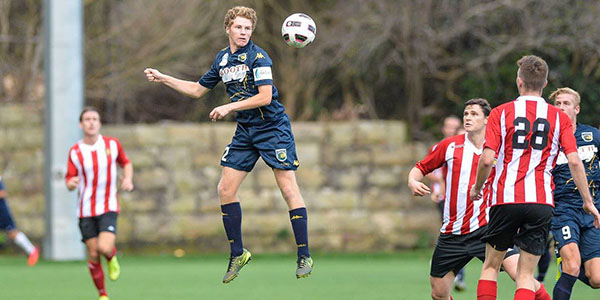 Trent enrolled as a student of the International Football School from its inception and has been a shining light within their program since day one.

“This is a great achievement for me as a player but I still have a lot of improvement to do and this is going to help a lot,” Buhagiar said. “Training full time has been great, the boys have been great to me and as a player I’ve improved a lot.

“Monty [Nick Montgomery] is always giving me tips on the pitch, telling me what I can work on and what I can do better so I would have to say that he has been a great mentor,” Buhagiar said.

Buhagiar is managing to balance studies with football and hopes to have a greater impact on the Hyundai A-League 2016/17 season.

“This season I would like to get myself into a position to be starting games, get more minutes than last season and score a couple of goals if I can,” Buhagiar said.

“I’ve got some exams this week so it’s great that they have fallen outside of the season but during the season I have to manage training in the morning and school in the afternoon which is going OK.

“I would also like to thank Paul Chapman and the International Football School, I’ve been there almost four years now and being able to get on the ball everyday helps a lot. They have invested a lot into me and hopefully I can repay that,” Buhagiar said.