Man marking Aaron Mooy is one of the hardest gigs in the Hyundai A-League and 20-year-old Harry Ascroft faced that task last Thursday night where he put in an inspiring performance that kept the inform attacker at bay for the best part of 70 minutes before being substituted in the 67th minute.

Amongst an inexperienced Central Coast Mariners’ line up, Ascroft has become one of the stand out performers with just five Hyundai A-League appearances to his name at both centre back and defensive midfield.

Head Coach Tony Walmsley praised Ascroft for stepping up and will consider the young defender as a starting option for his back four set to face Perth Glory this Saturday night.

“It was a big job for Harry and he did the job exceptionally well, I don’t think Mooy has had a quieter game this season, Walmsley said. “After a long term injury to come in and play central midfield in a role against a roaming midfielder and one of Australia’s best was an immense job.

“Harry’s naturally a central defender, possibly the best natural defender we’ve got in the club and I’m looking very closely at him to possibly make a start in the back 4 this week,” Walmsley said. 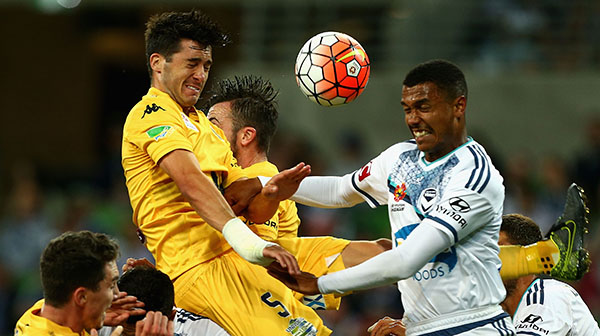 The Kissing Point Junior experienced a true baptism of fire in his fourth Hyundai A-League start, faced with the tough proposition of nullifying the involvement of Mooy. Ascroft put in an incredible shift that kept the Socceroo out of the game who must have breathed a sigh of relief once Ascroft left the field, only for Mooy to break free and score in the final minute of play.

The former VVV-Venlo centre half spent almost two years in the Netherlands where the teenager not only developed his game in one of the world’s most respected football nations but also matured quickly as a person, having to re-locate and live in a foreign country from a young age.

Those leadership qualities are starting to shine through in Ascroft who has ambitions to cement his position in Walmsley’s 11 but also emerge as a young leader of the Mariners’ crop.

“Obviously there’s been some positives and negatives this season but that’s the only way you learn, I’m happy to be playing as many games as I am so hopefully that continues,” Ascroft said. “I want to develop leadership qualities, become more vocal on the pitch.

“Missing Monty last Thursday night was a big factor but there’s no excuses. No matter how young some of us boys are, even me at 20, we still need to step up and take control of the game.

“Everyone in this squad has there own attributes, everyone’s got their own way of showing leadership qualities but you’ve got to look at the Captain, he shows great leadership and drives the boys everyday at training.

“I’m still learning, I’m just trying to learn off Monty and some of the other boys who are helping. Mooy is one of the best, if not the best player in Australia at the moment so it was good to be able to keep him relatively quiet.

“Everyone is demanding more of each other now, we’re all giving 110%, we’re trying so hard so when it clicks we will start picking up more points,” Ascroft said.

Walmsley has stayed true to the Club’s mantra of giving youth a chance and is confident that Ascroft and his young Mariners’ have the attributes to push for a Hyundai A-League finals berth.

“There will be a point that they do and their confidence grows enough where suddenly a Harry Ascroft with 4 starts under his belt looks like a player with 50 starts.

“We’re constantly pushing them to break the shackles within themselves to step forward and be really bold, when they are they will start to realise their potential,” Walmsley said.