Montgomery set to become an Australian Citizen on Australia Day

English-born Montgomery arrived on the Central Coast in 2012 after making the bold decision to relocate from Sheffield, South Yorkshire to the sunny Central Coast of New South Wales.

After managing over 400 appearances for Sheffield United which included a season in the English Premier League, Montgomery etched his name firmly into Blade folklore becoming a club legend for the red and white. ‘Monty’ as he is affectionately known, played a crucial role in the club’s promotion from the Championship to English Premier League in the 2005/06 season that saw him finish second behind Phil Jagielka in the club’s player of the year plaudits.

Montgomery, had it made in Sheffield after spending his whole life working to establish a place in their first team but it was an unexpected phone call from the Central Coast Mariners to Sheffield United’s Owner, Kevin McCabe that would change Montgomery’s life.

With his wife Josie and twin daughters who were then just 14-months-old the family made a life changing decision that landed Montgomery in the heart of a Championship winning Central Coast Mariners’ midfield. 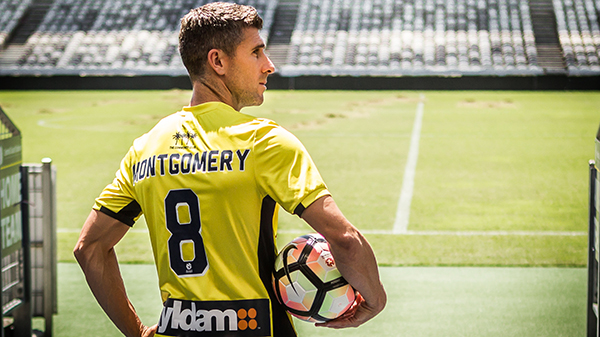 Now almost five years on with the two girls about to start their first year of school on the Central Coast, Montgomery couldn’t be happier with how his family’s leap of faith has paid off and couldn’t be prouder to call himself an Australian.

“This is a proud moment for me and my family,” Montgomery said. “We came here just over four years ago and after six months my wife’s home sickness went and we just realised what a fantastic place this is for families.

“To have young children and see them outdoors and enjoying life with all the activities Australia has to offer we said let’s get permanent residency – we now have so many good friends out here so it’s going to be a great moment when we are awarded Australian citizenship on Thursday,” Montgomery said.

Talking about their decision to move to the Central Coast, Montgomery was blown away with how quickly it all took shape after turning down countless opportunities to play football elsewhere.

“Looking back, I’d spent 14 years at Sheffield United and had some fantastic times and great memories there and the funny thing is I had so many opportunities to move clubs and I always thought I’m happy where I am and my family is happy – I’m at a big club so why do I need to move. I stayed there for 14 years but then got to a stage where I thought I want to try something different and go play abroad and Australia was always somewhere I’d like to go.

“At the time there was a connection between Sheffield United and the Mariners and it all happened really quickly, I spoke to the Sheffield owner Kevin McCabe who I’ve known for a long time and he couldn’t speak more highly of the Central Coast. When I told my wife Josie we had to decide really quickly, when she asked where it was let’s just say she was a little bit shocked but once I spoke to Graham Arnold and Lawrie McKinna we took the opportunity with both hands and here we are four years later,” Montgomery said.

Life off the pitch for Nick Montgomery is just as important as life on the pitch and settling into their home complete with all the Aussie essentials; a pool, ‘barbie’ and back deck has improved his family’s life since arriving. Montgomery also thanked the Mariners fans for welcoming his family with open arms. 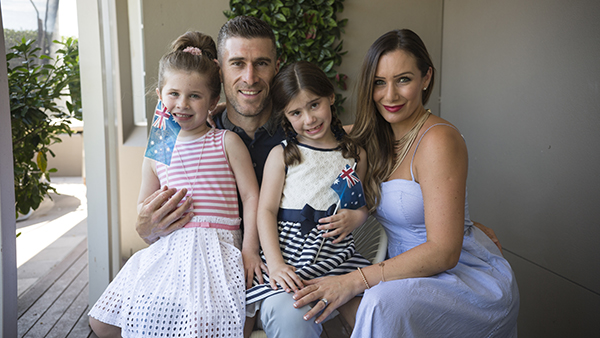 “We came here when the girls were just 14 months old and they were quite sick,” Montgomery said. “To be honest, since we’ve been over here with a warmer climate and outdoors lifestyle their health has been really good and we just love being outdoors.

“For me, as a family the Central Coast is definitely a great place to raise a family. The people here are fantastic, they’re relaxed, there’s beautiful scenery. Since we’ve been here you can see how much the Coast has grown, what was once a bit of a secret people are starting to clock on with how nice it is which is why so many people are moving up from the city for this lifestyle for your family.

“The Mariners fans have been amazing to us and I’ve enjoyed some success. The first season we won the Grand Final then playing in the Champions League – it’s been a massive journey but one that I’ve thoroughly enjoyed,” Montgomery said.

Be at Central Coast Stadium this Saturday to congratulate Nick Montgomery on becoming an Australain Citizen. Kids go FREE! CLICK HERE and enter the code pain11 to redeem up to four FREE junior tickets with the purchase of one adult ticket.