In an interview with the Daily Telegraph’s Tom Smithies, CEO Shaun Mielekamp explains that the pain the club is going through on the pitch is part of a restructure that can make it sustainable for years to come.

IT might seem extraordinary that the team finishing bottom of the Hyundai A-League is one of the few to turn even a modest profit.

The level of detail in Mielekamp’s blueprint is convincing. It takes in incremental increases in crowds and memberships, population forecasts for Gosford, regular marquees and the hugely impressive centre of excellence complex at Tuggerah officially opened last week by Malcolm Turnbull.

It began when Mielekamp, a Coast local, came to the job from Western Sydney, with a painful realisation.

“What’s become obvious to us is that the on-field success and the style of play we’ve had has not been a successful business formula,” he said. “We’ve had the bunkered-down, siege mentality, but it doesn’t translate into big crowds or big corporate support. We need to find a business model that delivers those.

“The club’s been very focused historically on the next six or 12 months, not the seasons to come beyond that. We want to send the message that we’re battling for premium success, not just survival.

“Why we play football is to grow the community, that’s the core reason. The glory and prestige are all very nice, but it’s all ultimately about growing our community. As that grows it allows us to build the business – something we’ve been particularly poor at over the past few years – and that tips back into football and funds the club. We get a bigger membership base, more commercial leverage etc and that feeds back into football.”

As well as the business success of the centre of excellence, Mielekamp is also tying the club’s future to radical plans for Gosford city centre, with “$700 million of DAs that have been approved, including five skyscrapers”.

“In three years, we want to see the development of our players bearing in fruit. The new broadcast deal will be in its second year, and the new free to air network will really know how to maximise the league. All the metrics should change with that kind of FTA exposure. That becomes a game-changer for the club.” 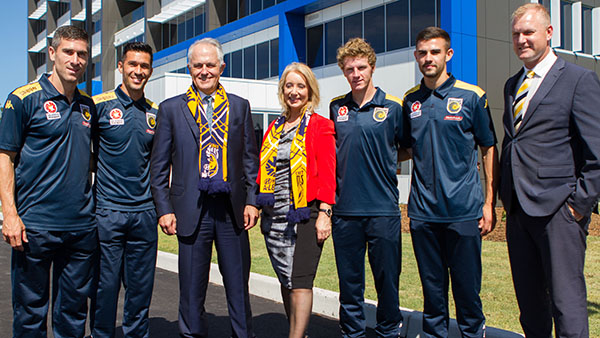