The Mariners were at their electric best going forward and well structured defensively to open Round 8 of the Hyundai A-League in Gosford.

Goals to defender Harry Ascroft in the first half and a Roy O’Donovan poacher’s finish after the break sealed the points to push the Mariners into the six ahead of the rest of the round.

This was the Mariners’ first clean sheet in 36 matches and the first of goalkeeper Paul Izzo’s Hyundai A-League career.

“It was a fantastic performance tonight and to be honest, 2-0 flattered Perth … a couple of decisions went against us but proud of the boys tonight,” Montgomery told Fox Sports after the game.

“We kept going and going and even right at the end we were still trying to score goals.

“To get that clean sheet for me, everyone’s gone on about it [conceding goals] every week every week but now that’s gone.”

Montgomery also hailed the defensive duo of goal-scorer Ascroft and Jake McGing in the Mariners’ win, saying their partnership was key. 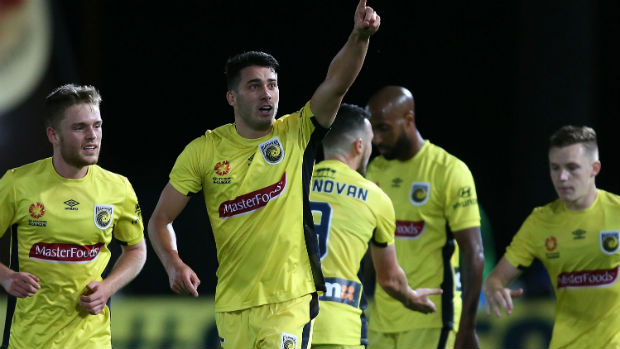 For Glory, they’d be desperately disappointed in their display.

Another concern is losing Caltex Socceroo Josh Risdon in the warm-up and reigning Johnny Warren medallist Diego Castro inside the first 20 minutes, both to injury.

But for the Mariners, they move into the six ahead of the remainder of the round as they eye their next home match against Wanderers on Saturday December 3.

“We’ve shown over the first seven rounds that we can play some fantastic football and keep possession.

“Maybe at the start of the season, we kept the ball in places and were a bit negative but now the boys are finding them pockets and being confident in playing them forward passes. And tonight against a good Perth team, when that happens we’re a good match for anybody in the league,” added Montgomery.