The Central Coast Mariners are excited to announce the signing of 26-year-old Spanish striker, ‘Asdrúbal’ who has put pen to paper a one-year-deal ahead of the Hyundai A-League 2017/18 season.

Asdrúbal arrives on the Central Coast with an impressive CV having played most of his career in Spain with his home town club, ‘UD Las Palmas’ who are based in the Canary Islands.

In 2014 Asdrúbal was promoted to the club’s first team and handed the honour of wearing the number 9 jersey where it took his side just 12 months to earn promotion into Spain’s top tier to play La Liga football. 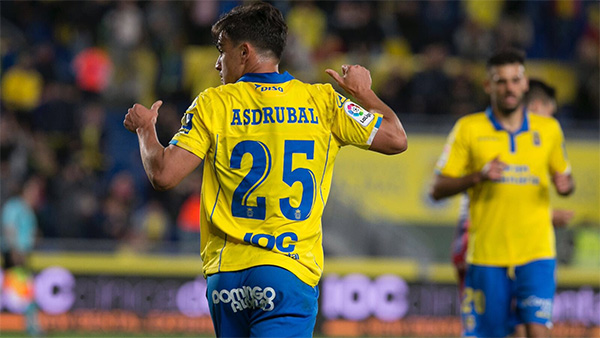 During the 2015/16 campaign, Asdrúbal went on loan to Spanish club ‘CD Leganés’ and again earned promotion to the Spanish La Liga before returning to his parent club.

The hard-working Spanish striker completed his medical at the Central Coast Mariners Centre of Excellence on Thursday and is Paul Okon’s 10th recruit of the Hyundai A-League pre-season. Asdrúbal was also greeted by a familiar face in fellow countryman, Alan Baro whom he played against when Baro was with ‘SD Ponferradina’ between 2013-15.

Asdrúbal is known for his incredible goal scoring ability which was highlighted by an impressive bicycle kick he scored in the 2014 Copa Del Ray against ‘CD Numancia’ to equalise just before half time.

“I am really happy to be here playing for the Central Coast Mariners,” Asdrúbal said. “This is a really exciting opportunity for me, I’ve studied a lot about Australia – it seems like a beautiful country. I’ve also seen Central Coast Stadium which looks fantastic.

“The Hyundai A-League is a good competition, it’s a great opportunity for me to establish myself as an important player and my decision to come here is based purely on football but I’m sure this will be a beautiful place to live with my family.

“Obviously scoring goals is fantastic and it’s my number one objective but more importantly what I am all about is work rate. I want to contribute to the whole team; my work rate is something that the fans will see a lot of and my never give up attitude. If goals follow from that, then that’s the bonus.

“Coming from arguably the best league in the world there’s a difference between the two leagues reputations but from what I’ve seen the Hyundai A-League is of high quality and the players are in great physical shape. I’m sure this will prove a challenge for me but hopefully I can draw on the experience having played against superstars in Spain – most importantly nothing changes. I hold the same respect for the league here as I did in Spain. The work rate I will put in won’t be any different, I want to set an example for the younger players in the way I train,” Asdrúbal said.

Paul Okon was delighted to secure the services of a proven Spanish goal scorer and hinted there may be more signings to follow.

“We’ve waited patiently to fill this position, we’ve looked at a lot of strikers and we wanted to make sure we took our time to find the right ‘9’ to complement the way we play and we are sure that we’ve done that,” Okon said. “This is an area we knew we needed to strengthen and we strongly believe that we’ve got that right balance between experienced players in important positions with young players who are going to develop even more by having that experience around them so it’s really exciting times.

“He is 26-years-old which is still quite young but he has La Liga experience, his pedigree is good and he has played in some very good teams – the way he scores goals has really impressed us and it fits into the way we play.

“His work ethic is very good, everyone that we spoke to when we were doing our research all spoke very highly of him as a top professional. In the end, it wasn’t a difficult choice but we wanted to make sure we took our time to be 100 percent certain.

“We have another spot on our roster and again we are looking at our options, we will probably wait until the end of pre-season to further understand which areas we may need to strengthen but for the time being we are content with the numbers and what we’re going to be working with.

“We have Visa positions available and are definitely keen to utilise them if it will add value to our squad,” Okon said.