On the eve of the Central Coast Mariners first Hyundai A-League match of the season the club have signed a co-major sponsor in Dyldam, an award-winning Australian property development and construction company.

Commencing on Saturday night against Perth Glory, the Central Coast Mariners will don their iconic yellow Umbro kit with the Dyldam logo featuring front and centre to symbolise the Mariners’ flagship away shirt partnership with Dyldam. 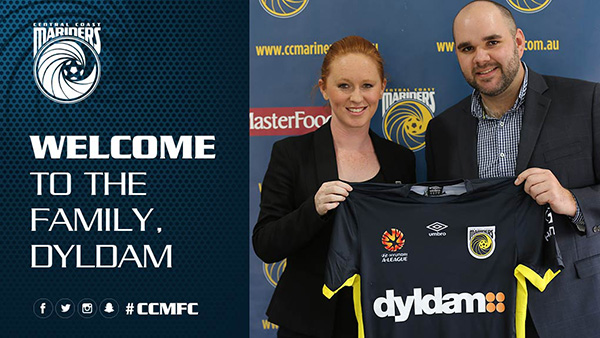 “I would like to thank Sam Fayad for showing the vision and confidence in not only the Central Coast Mariners but the whole Central Coast community,” Mielekamp said.

“To have national brands of the calibre of Dyldam pledging their support behind the Mariners is an indicator of what our future holds as a football club and a region.

“Everyone who lives in the Coast knows that this is the life, we have the capacity and motivation to make sure that everyone across Australia looks to the Central Coast and thinks, wow, how good would it be to live there.

“It is with great pride that we launch such an important season in our history for the first time with two Co-Major Partners of enormous national stature.

“With Masterfoods we built some great brand awareness and giant sauce bottles, with Dyldam we can build anything and the future with them is brighter than our jersey,” Mielekamp said.

“Dyldam has been an active supporter of sport as a vehicle for building community spirit.  Football is one of the fastest growing sports globally. Until today, we have sponsored junior football teams and watched their players develop.  Now we have joined the A-League. It is an exciting new chapter,” stated Sam Fayad.