The Central Coast Mariners will return to the nation’s capital next month for a double header against two teams made up of Canberra’s best players on Tuesday September 6 at Woden Park Enclosed.

Kicking off back-to-back at 6:00pm & 8:00pm against the Capital North region Select and Capital South region Select, the Central Coast Mariners will be split into two teams for the matches at Woden Park.

Indeed, the match will play a crucial role in the Mariners’ pre-season but it will also provide the Hyundai A-League club with a perfect opportunity to identify players from Canberra will earn the opportunity to spend a week on trial with the Central Coast Mariners.

With Canberra’s GIO Stadium set to host two Central Coast Mariners’ home games this Hyundai A-League season, the Mariners are building on their strong relationship with the ACT’s football governing body and the collaborative talent pathway is the next big step.

During the Mariners’ Kanga Cup visit in July the ‘Capital Draft’ initiative was launched that will identify Canberra’s three best footballers and one coach who will gain an unparalleled opportunity to benefit from experience with a full time professional set up.

With the assistance of Capital Football, Canberra’s crop of PS4 NPL talent has been split geographically into the following regions:

* Players from the Canberra United Academy will also be selected into each team.

In addition to Tuesday night’s double header the Central Coast Mariners will partake in a raft of community activations that includes a coaching clinic for over 100 local children, ‘coach the coaches’ session for over 100 local coaches along with more appearances in Canberra that will be confirmed in due course. 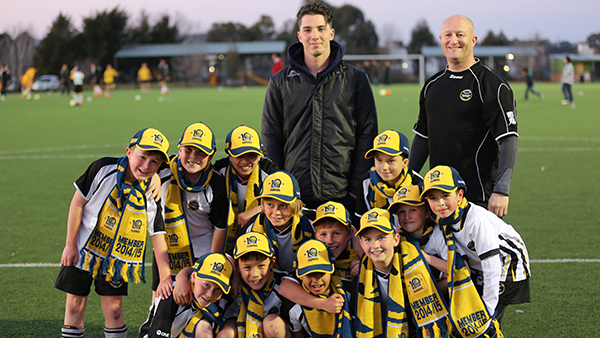 “I’d like to thank Mark O’Neill, Phil Brown and the Capital Football Board and as our relationship with Capital Football grows it’s going to be great for football in the region,” Mielekamp said. “We’re really excited about the Capital Draft and the two games we are playing in Canberra.

“Our two matches at GIO Stadium give us the opportunity to showcase our brand and form genuine connections in Canberra so we look forward to being more involved with community football in the A.C.T. and putting on a very special couple of events.

“A lot of our Members are very excited about making the trip down and are planning the road trip down Remembrance Drive so it’s going to be great for the Canberra economy,” Mielekamp said.