Today one of our very lucky (and loyal) Members, Narelle Ryan, drove home her brand-new Hyundai i30 thanks to Booth’s Hyundai’s season-long competition!

Booth’s Hyundai have been a proud Corporate Partner of the Mariners since season one and for the second consecutive season gave anyone who attended a Mariners’ game at Central Coast Stadium the chance to win a car.

Last week the Mariners randomly drew 10 finalists who were all given a key at our final home game on Sunday. One of those keys would unlock a brand-new car and the person who drew the lucky key was Narelle who today picked her new car up from Booth’s Hyundai at Tuggerah.

It’s safe to say that Narelle was over the moon to be rewarded for her loyalty to the Mariners and couldn’t thank Booth’s Hyundai enough. 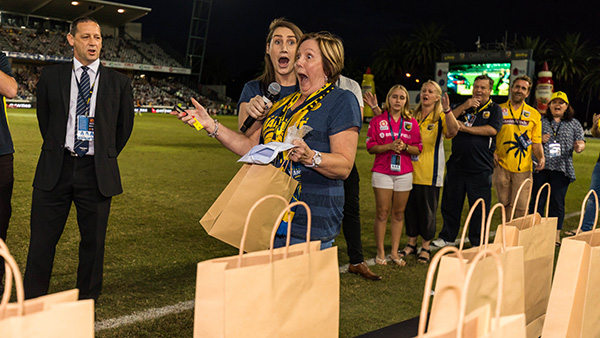 The moment Narelle realised that she had won a new car

“I honestly can’t describe this feeling,” Narelle said. “It’s simply amazing. “When I first grabbed the key, I had to ask Bree which button to press because I didn’t have my glasses on – then I clicked it and I didn’t think anything happened but next minute it was like slow motion when the flash of the lights came on then I don’t know what I did, I screamed!

“I still can’t believe it, I just keep replaying it over and over in my mind.

“This is such a generous thing that Booth’s and the Mariners do for us Members and it’s just super exciting for the Mariners to have an initiative like this to share with us so I can’t thank them enough.

“This is what it’s all about, this is what I love about being a Mariners Member. I love the game day experience at Central Coast Stadium. The palm trees, our stadium is home for me – win lose or draw it’s always a fantastic experience,” Narelle said. 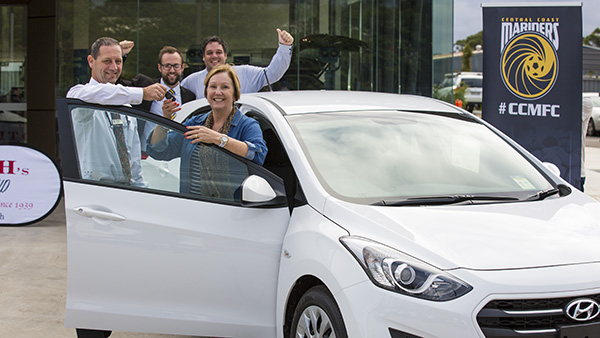 “It’s always exciting to see a customer take delivery of a brand-new car and today was especially exciting with Narelle having won it,” Mr Booth said. “It’s very special.

“The Mariners are such a big part of the Central Coast and we are really glad to be involved with them and for us it’s a great way to give something back.

“Hyundai have been rewarding A-League members since day one and every Mariners Member is also eligible for a $500 discount when they purchase a new Hyundai. How good is that? $500 off a new Hyundai just for being a Member, and the chance to win a Hyundai i30 for every home match you attend,” Mr Booth said.