The history of the #F3Derby plus footballers who have made a significant contribution to the game in the Central Coast and Newcastle regions will be recognised with the first ever ‘Legends Challenge’ at Central Coast Stadium on Sunday 9 April 2017.

The squads will be made up of former greats from Central Coast Mariners & Newcastle Jets as well as potential representation of players from the National Soccer League (NSL) era.

Whilst the squads for both the Central Coast and Newcastle are yet to be finalised, Hyundai A-League Championship winning players Patrick Zwaanswijk (Central Coast) and Matthew Thompson (Newcastle) will represent the respective teams.

The inaugural ‘Legends Challenge’, supporting Men of Football, will kick-off at 3:30pm and feature two 15 minute halves in a 7-v-7 half-pitch format.

The game will take place shortly before the commencement of the final #F3Derby of the Hyundai A-League 2016/17 regular season, which starts at 5:00pm.

The participating players will also form a guard of honour for the current #F3Derby combatants as they take to the pitch in Gosford for the round 26 encounter.

It is envisaged that the ‘Legends Challenge’ will be held annually, with the location of the match rotating between Central Coast Stadium in Gosford and McDonald Jones Stadium in Newcastle. 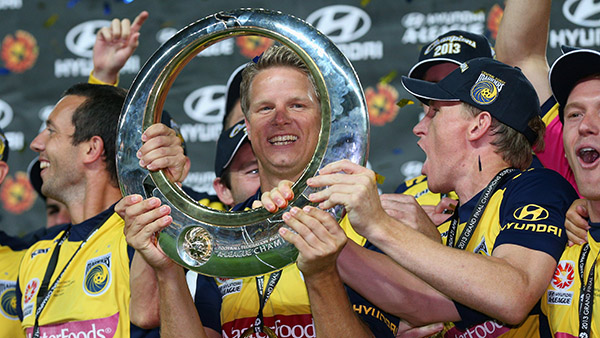 The Chief Executive Officers of both Clubs Shaun Mielekamp and Lawrie McKinna agree that the ‘Legends Challenge’ has the potential to add to the fabric and folklore of the #F3Derby.

Mielekamp was quick to fire the first shot ahead of the inaugural ‘Legends Challenge’.

“So I asked Lawrie if he would coach his old players but I must admit the response was quite awkward,” Mielekamp said “This is a really good concept and one that will stand the test of time to build on the fierce rivalry that exists between the two clubs.

“I know Lawrie really wants to coach the Mariners in this but then when the request came back for Paolo [Paul Okon] to be the captain of the Jets Legends I knew that the spice and rivalry for this match will be as engaging as the A-League proper,” Mielekamp said.

McKinna said that recognising the history of such an iconic rivalry is crucial to growing the #F3Derby.

“It is important that we continually look to build the history and culture associated with the #F3Derby and the rivalry that generally exists between the regions,” McKinna said. “This is just one way that we can continue to engage players and people that have made a remarkable contribution to football, while also educating others about their achievements.”

Further highlighting the significance of the inaugural ‘Legends Challenge’, FOX SPORTS Australia has agreed to throw their support behind the joint Club initiative by featuring highlights of the match in their #F3Derby pre-game show.

The winning Club in the ‘Legends Challenge’ will also be presented with a perpetual trophy.