Thanks to Brightfield Group Services the Central Coast Mariners will trade its Yellow & Navy stripes to wear bright pink against Melbourne Victory in support of women’s cancer research, prevention and support services on the Central Coast. The match will be played in Hyundai A-League round four on Sunday October 29.

For the sixth consecutive season, the Mariners will dedicate a Hyundai A-League home match to women’s cancer support services on the Central Coast.

Since 2012 the Mariners have raised almost $80 000 by donning pink jerseys, followed by an online auction of the kits along with bucket collections and other collaborative fundraising initiatives between the Mariners, Cancer Council NSW – Central Coast and Brightfield Group Services.

In a major boost for the Mariners, Brightfield Group Services have extended their support for the club’s Pink Round for the fourth season running, a relationship that commenced in the Hyundai A-League 2014/15 season. Brightfield have signed a contract extension that will see them continue their support for Cancer Council NSW – Central Coast for at least two more seasons! 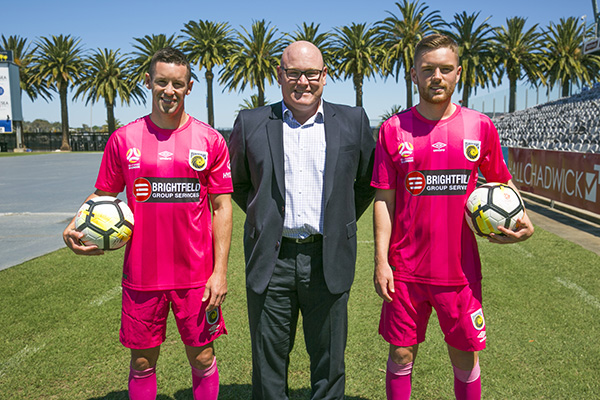 This season, the Central Coast Mariners have teamed up with Cancer Council NSW – Central Coast to raise funds for its Family Meals @ Home as part of their Home Help service on the Central Coast. The goal is to help ease the stress of daily living so that families can relax for an evening and enjoy a shared moment with loved ones.

The Mariners limited edition pink jerseys will be available for purchase at Rebel Erina & Tuggerah from Thursday October 19. Members & fans will be invited to Rebel Erina for a retail launch of the jersey which will be the first opportunity to purchase the pink kit and meet Mariners players.

The Central Coast Mariners are also contributing to the following awareness and fundraising initiatives:

Brightfield Group Services – who offer flexible, specialist facilities management solutions tailored to each individual client and business – will have their brand re-appear on the Club’s pink kits and team up with the Mariners to help raise awareness and funds towards the prevention of women’s cancer.

Brightfield’s National Business Development Manager, Daniel Campbell, said the company is delighted to continue its support for the Mariners in the name of a great cause. for the fourth consecutive year.

“Both Brightfield and the Mariners have always had their base on the Central Coast,” Campbell said. “We are proud to be the Pink Day sponsor – our office has been touched by cancer so to have the opportunity to sponsor the Mariners and support the Cancer Council is something that really means a lot to Brightfield.

“Whilst Brightfield Group Services has a national footprint, we love our home. Our home will always be the Coast. The Mariners and their supporters are what makes the Coast so great. They have enjoyed enormous success over the years but they have never lost their grounding – the Members remain the real focus. Brightfield has that same focus and commitment to the same people that have supported us over the last fifteen years,” he said.

Supporters can find out more about Brightfield Group Services by visiting www.brightfield.com.au