The Central Coast Mariners Academy Under 18s have kicked off their PS4 NPL 2 Season in outstanding fashion and remain unbeaten after 10 games.

After ten competitive matches the U18s have won nine games, drawn once and sit top of the table on 28 points, with the next closest team (Marconi Stallions) a staggering seven points behind them heading into round 11

The Mariners started their campaign strong, defeating Marconi Stallions on match day 1, 1-0. Although it was an own goal that decided the game, Pete Preston’s side controlled most of the game, and most importantly started their season with a clean sheet.

In their second match of the campaign, the Mariners travelled to Blacktown International Sports Park, where the Yellow & Navy defeated the recently relegated Blacktown Spartans 2-0. It was another impressive performance, with the Mariners keeping their perfect defensive record alive with another clean sheet.

On match day three of the season, the Academy thrashed Hills Brumbies 10-3. It was yet another dominant performance from Preston’s men, with Matt Cahill scoring four goals on the day.

The Mariners Academy then faced their toughest test of the season, going up against a strong Northern Tigers outfit. After conceding first, the Mariners showed great character to get themselves back in the match and earn a point away from home whilst keeping their undefeated run alive.

The U18s were back in the winning circle against St. George the week after, putting the Saints to the sword with a 7-2 result. U16s striker Sasha Kuzevski and potent attacker Scott Macey both scored doubles, whilst Ottie Clarke, Josh Nisbet and Addison Brader were also on the scoresheet.

It was a similar story a week later, when the Mariners dispatched Mounties Wanderers 5-1. Despite leaking a few goals at the back in their recent games, the U18s outfit continued their prolific goal scoring record with a huge number of goals to improve their goal difference week-on-week.

Round seven saw the Mariners Academy face one of the toughest road trips in the PS4 NPL competition away to Macarthur Rams and nothing changed. The Mariners swept the Rams off their feet, winning 8-2, with Addison Brader and Jed Hornery both bagging braces on the night.

Full of confidence, the Mariners went into their clash against Bankstown Berries to score seven goals without conceding. Although they scored seven goals, it was a welcomed clean sheet, their first since round two.

In what was the Academy’s toughest test on paper in round eight against the Western Sydney Wanderers Academy, the U18s stamped their authority on the competition by winning 4-0 at Blacktown International Sports Park.

For their most recent match in round 10 the Mariners Academy faced the North Shore Mariners at Pluim Park. Despite North Shore playing some good football, the U18s continued their dominant run defeating North Shore 4-2, with Kyle Johnson scoring a double. 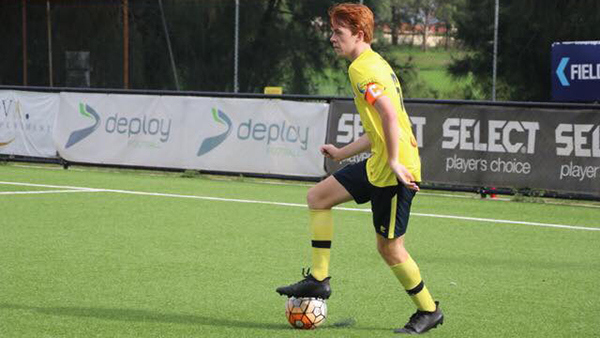 Coach Peter Preston is happy with how the season has started but has warned his players that the hard work cannot stop.

“They are a good group of boys and I want them to continue to work hard on their game both individually and for the team,” Preston said. “The coaching staff don’t want them to be content with just playing under 18s, and it is extremely important that they continue to push themselves with the view of playing in the higher grades.

“Ben Cahn has already shown that players will be given opportunities if they play well and we saw that on Saturday when Addison made his first-grade debut after performing well in the 18s and 20s,” Preston said.

After the first ten games, the under 18s have scored a staggering 49 goals and Preston credited his side’s work ethic.

“They work really hard, and so far have implemented everything from the training pitch into game day,” Preston said. “They have really embraced the club’s philosophy on attacking play and are enjoying the freedom to express themselves when it comes to match day,” Preston said.

Under 18s Captain, Sam Webb praised his teammates for the side’s style of play and comradery on the pitch.

“We are playing good, attractive football and most importantly scoring goals, the team as a whole is a tight knit group and we all work for each other,” Webb said.

“We are all very confident in what we can achieve, but as captain I have told the boys not to get ahead of themselves because of our early form. We play each game as it comes and prepare accordingly for our next opponent.

“There is no doubt we have started the season well, but there is always room for improvement, and defensively I think there is room for that. We have been leaking some scrappy goals that are very avoidable, and being a part of the defensive set up, it is haunting me. We are nearly averaging five goals a game, so the attackers are doing a great job, if we can just tidy it up at the back a little bit we will improve even more,” Webb said.

The U18s team will look to continue their winning ways when they face the Mount Druitt Rangers this Saturday afternoon away from home.