The Man Behind the Mariner: Jack Clisby

97 Hyundai A-League appearances, four A-League clubs and a out hit against his favourite English Premier League club – 26-year-old Jack Clisby has achieved a lot in his realtively young career. He’s accumulated a lengthy highlights reel for the Yellow and Navy in just one pre-season, so with an exciting Hyundai A-League season ahead, the defender talked about the highs and lows of pursuing his dream job: a footballing career that came very close to not happening at all.

Clisby has travelled across the country to ply his trade. He’s made appearances for Perth Glory, Melbourne City, and the Western Sydney Wanderers, but with his family still living on the other side of the country, he’ll always be a Perth boy at heart. 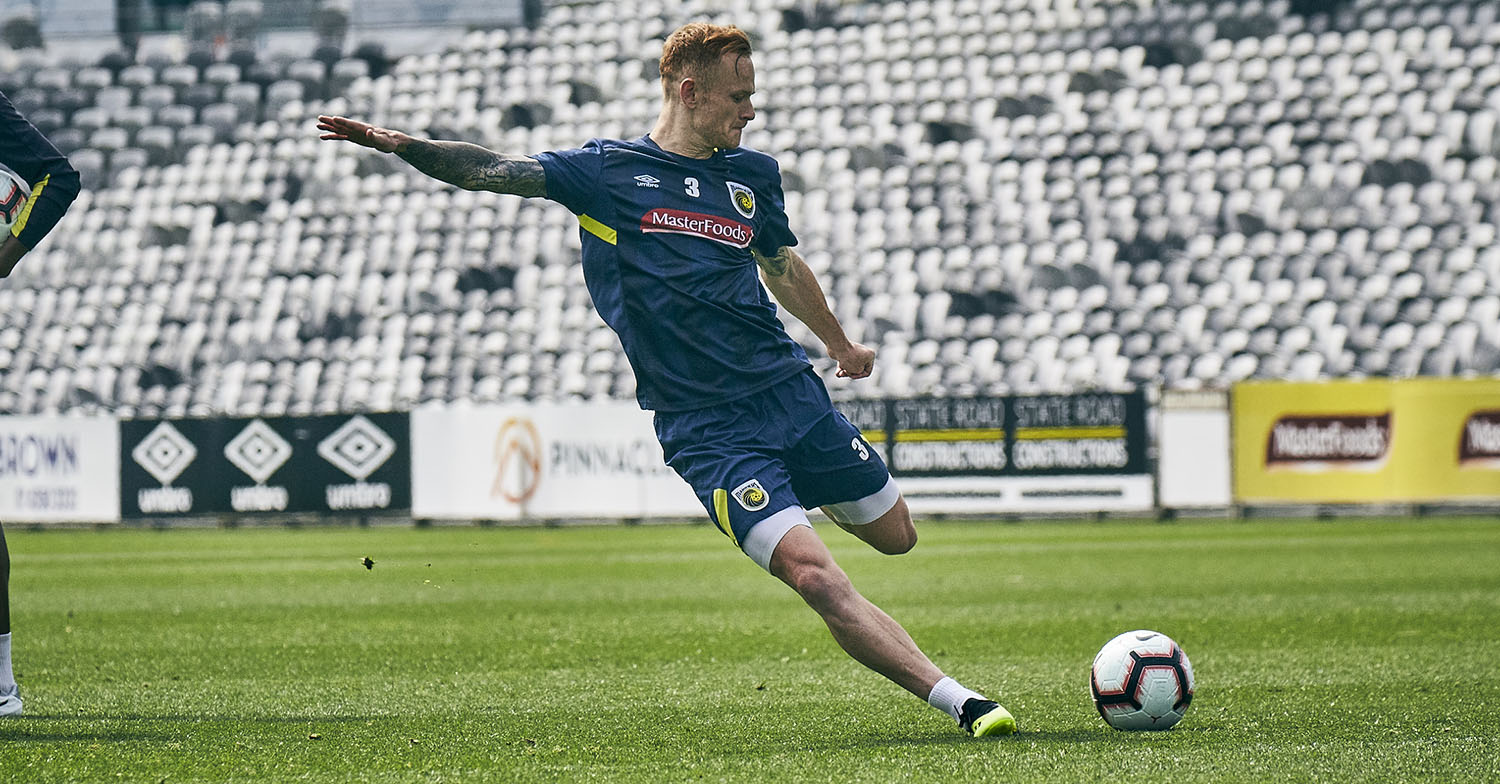 “My mum and my dad and my brother they all still live over there, so I still call it home, in a way, because I’ve moved around quite a bit, and Perth will always have my family and my friends there,” Clisby said.

“The rest of my family all live in Scotland,” he said. “Mum and Dad moved over 30 or so years ago to Perth from Scotland, so cousins, relatives, all that, they all live over there, so it’s nice when they come out and visit. I think the last time I visited was probably too long ago, it was maybe when I was 18 or 19, when I was playing football over there, so I should probably go back again sometime soon.”

During that most recent visit in late 2010, Clisby travelled from Perth, Australia to Perth, Scotland. There, he played youth football for St Johnstone FC with the hopes of working his way into the Scottish Premiership.

“I was there for a year,” he said. “I was part of the youth set up for the St Johnstone Football Club. I didn’t really get the chance to break through into the first team, so I decided to come back to Australia.”

His Scottish venture had a disheartening outcome, and it was a setback that nearly had Clisby hanging up his boots for good.

“At that point, I thought I might not have been able to make it as a professional,” He admitted. “I was actually thinking about giving up football. But my dad, who loves football, and has always driven me to keep going, said ‘Look, just give it one more year, play in the WA NPL for Inglewood United.’”

It was a wise piece of advice to follow, and the resilience Clisby showed put him back on track for a bright future in football.

Jack Clisby is a man on a mission #CCMFC #ALeague pic.twitter.com/YplSMmjOmr

“I ended up getting player of the season for the whole league as a centre back, and that put me on the books for Perth Glory,” he said. “It was not long after that they approached me and I started training with their first team, and the next week I signed a contract and I was playing my first professional game.

“My debut, which was on Australia Day back in 2013, that was a fantastic experience and a proud moment for my family,” Clisby said.

It was the realisation of a dream that Clisby had fostered for a long time. He may have considered different options when playing professionally seemed out of reach, but he was always drawn back to football.

“I was about six when I started I reckon,” he said. “I haven’t stopped since, because it was all I ever really wanted to do.

“I’ve had plenty of jobs here and there,” Cliby said. “I’ve started apprenticeships in cabinet making, done bits on the side in landscaping, I’ve worked in restaurants, but nothing was really sitting right with me, I was always too keen to play football.

“I have studied in fitness. It was a very long time ago, as I had just left school, and I was eligible to be a personal trainer but that’s when football things started happening so I didn’t follow that path, I just kept following my football path, and I’m glad I did because it worked out.”

Since his debut, Clisby’s career has stayed on an upward trajectory, with plenty of great moments for him to celebrate – including a rattled crossbar against his favourite Premier League side.

“The biggest highlight of my career would have to be playing against the club I supported while I was growing up, playing against Arsenal in the last pre-season with the Wanderers, that was a pretty special moment,” he said. “I hit the crossbar there, but I should have scored against them, and I would have happily retired after that I think! That was definitely a career highlight.”

“I also got to play against Manchester City, which was an amazing experience with Melbourne City,” he said.

Just last season, Clisby was able to celebrate his first ever Hyundai A-League goal in a match for the Western Sydney Wanderers against Adelaide United.

“My first goal was also a pretty good moment. It took me 90 games to get my first goal, so I think my celebration was probably a little over the top for what it was, but I just couldn’t contain it,” Clisby laughed.

Although he’s still a Perth boy, Clisby has found it easy to settle into the Mariners’ club culture and the Coastie lifestyle.

“I’m heading into my prime years now, and I really want to prove to myself and everyone else what I’m capable of.”

“It’s a beautiful place, it’s a great environment.” he said. “It’s very beachy, the weather feels hotter than down in Sydney and the vibe of the club – I’ve settled in very well, from the coaching staff to the players to the area itself, I couldn’t be happier at the moment.”

Gelling with your teammates is a crucial part of settling into a club, and with a friendly face around to help him find his feet, Clisby has bonded well with the rest of the squad.

“Well I’ve been following Jacob Melling around,” he joked. “I’m obviously very good mates with Jacob, and since coming to the club I’ve clicked quite well with Michael McGlinchey, I feel like we have quite a lot in common. Kalifa as well, I get on well with him, I can have a good conversation with him.

“Having said that, I get on well with all the boys, there’s not a bad egg in the squad,” Clisby said. “I think that’s very important, putting a squad together where you get everyone right, not just player wise but also personnel wise, because that’s what builds the culture and builds a strong team.” 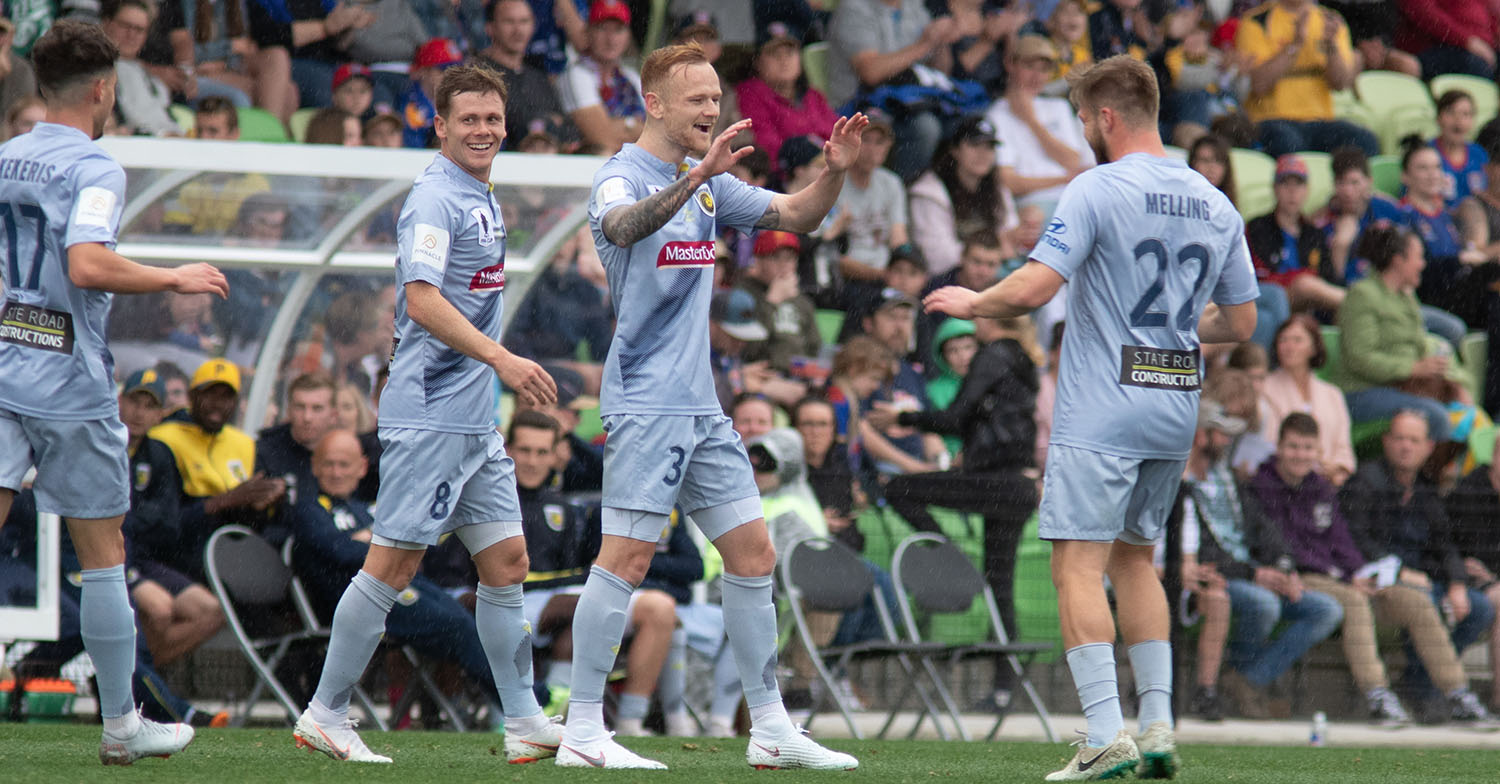 Of course, it’s important that a squad works well on the pitch, but some of the most important team-building moments happen off-duty. So, what do the Mariners get up to when they’re not on the training field?

“We just do typical footballer stuff!” Clisby laughed. “Go out for lunch, grab a coffee. A lot of the boys love the PlayStation, I think the new Call of Duty game is coming out soon so that should spark the team up,” Clisby said.

“Most boys live around the Terrigal area, which is a good place to go out and have lunch after training.” he said. “I’m sure as the weather gets better, on days off or after training we’ll be down at the beach, just living that Coastie kind of life!”

It’s not all beach trips and video games though. Just like the rest of the squad, Clisby is training hard, motivated by a desire to take on more responsibility as one of the more experienced players in a young squad.

“I want to bring more to my game that can help the team more,” he said. “I’ve been practicing my finishing, my crossing and my set pieces, and that’s something that I had maybe as a youngster, but as a younger player in a professional environment, you give that to the older players with the experience, who are good in those areas, but at 26 I think it’s time for me to step up and bring that element to my game as well as what I already have.”

Sit back and enjoy all 7️⃣ goals from our Friday night football fiesta with Central Coast Select. #CCMFC #ALeague pic.twitter.com/MauGtIgXdR

That effort has demonstrated clear results. The hard-working defender has looked impressive in the pre-season as a left-back, and after only one goal in 97 Hyundai A-League appearances, he has since put his name on the scoresheet for the Mariners on multiple occasions this pre-season, which included a double against Central Coast Select and a beautiful free-kick against the Jets.

“I think the pre-season that I’ve had, I’ve been getting assists, I’ve been scoring a few goals, and that’s what I want to carry with me into the season. I believe that with the squad we’re putting together, we’re going to have a really successful season,” Clisby said.