Julie and the full Central Coast Mariners squad were today treated for lunch at MasterFoods HQ to celebrate the appointment of Julie and officially welcome her into the Mariners family.

A Mariners fan since day one, Julie has been attending matches with her family for the past 11 seasons and has been there cheering the boys on through thick and thin.

As the club’s number one ticket holder, Julie will fly the flag in the Central Coast and broader community as an ambassador for the club that she has passionately followed since 2005.

Although the club boasts an existing relationship with Julie and her Culinary School, Julie’s Place, today the mother of three was proud to be officially named the Mariners number one ticket holder 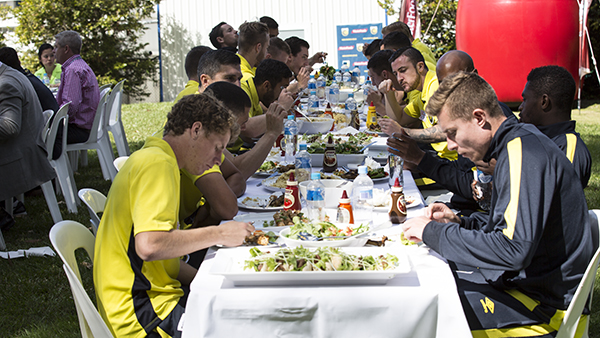 “I am so excited and unbelievably honoured to be named as the club’s number one ticket holder,” Goodwin said. “Our whole family has followed the club since it all started so I am very honoured and humbled.

“The Mariners games have always been a great family bonding thing for us, it’s given us so much fun and so many good times. The Mariners are a huge part of the community and gives us all someone to barrack for.

“The team is as important to the community and the community is to the team. I’ve got a really good feeling about this season, the vibe around the playing group is great.

“When I told my family about this they were over the moon, one of the boys said it’s like being given the keys to the city,” Goodwin said.

“We are proud to officially welcome Julie Goodwin into the Central Coast Mariners family as our number one ticket holder,” Mielekamp said. “Julie is not only a great role model in the Central Coast community but most importantly, a passionate Mariners Member.

“Today is an exciting day for us and it is fantastic to bring MasterFoods, the Central Coast Mariners and Julie Goodwin together over a nice meal here at MasterFoods HQ to mark the special announcement.

“Julie will become an integral part of the Hyundai A-League 2016/17 season and hopefully she can even teach a few of our players some tips in the kitchen along the way,” Mielekamp said.

Andrew Poll, CFO of Mars Food Australia, the makers of MasterFoods hosted the team and Julie for lunch today and re-enforced the importance of making dinner time matter.

“At Mars Food we believe in the benefits of strengthening social connections, as we have experienced today in preparing and sharing a healthy, great tasting meal with family and friends,” Poll said. “As the Mariners Major Sponsor we are excited about the upcoming season and wish them and all their supporters a successful season both on the park and in their meal times at home with their friends and families,” Poll said.