Garcia’s A-League vow: ‘my best is yet to come’

In just two games the ex-Liverpool star has made an immediate impact on the Central Coast.

In his A-League debut, he sparkled as a late substitute in the loss to Wanderers helping set up his team’s equaliser.

The Spaniard then sparked the Mariners’ classy 3-1 win over Wellington Phoenix in Christchurch on the weekend.

The 37-year-old came off the bench at the break and scored the opening goal, before setting up the next two for Storm Roux and Mitch Austin.

Asked if he thought things would click so quickly, Garcia told reporters on Tuesday: “Not really…there’s a lot of work to do. I’ve been doing things well but I think I can do a lot better.

“My body is still not 100 percent so hopefully in a few more weeks I can feel a lot better and give more things to the team.”

Garcia’s goal in New Zealand was the perfect demonstration of just why the club were desperate to bring him to Gosford.

Showing all his class and experience, Garcia anticipated Phoenix ‘keeper Glen Moss would struggle to handle a cross and was in the right place at the right time to pull-off a stunning back-heel into the net.

“It was a fast reaction. I saw the ball was coming with a lot of spin so I knew it would be difficult for the keeper to catch and I tried to go forward to it,” Garcia explained.

“I saw the ball there and it was just a quick reaction because I knew if I had another touch probably the keeper or defender would get back in goal.

“It went well. It was a beautiful goal.” 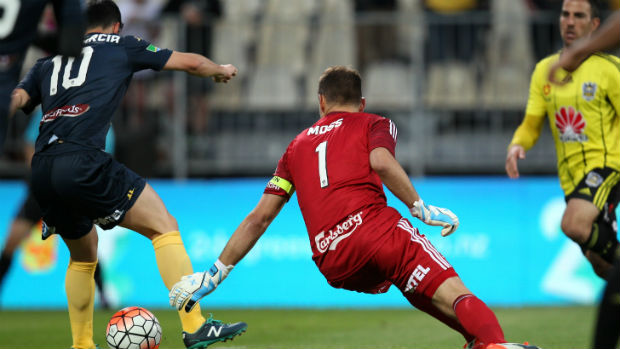 And Mariners boss Tony Walmsley will be hoping for something similar from Garcia for Saturday’s tricky trip to Brisbane to face a resurgent Roar.

“We know they are a good side but we are concentrated on what we have to do. The rest of this season is all about improving,” Garcia said.

“The team is looking better, has a lot of confidence with the ball and we almost had a clean sheet [against Phoenix] which we missed the whole season.

“We know it will be difficult but we’re going to have our chances and we have to take them.”