Central Coast Mariners boss Tony Walmsley intends to persist with marquee man Luis Garcia in a starting role despite a quiet display in his first start against Adelaide United on Sunday.

After making three impressive cameo appearances off the bench over the last few weeks, the veteran Spaniard was used from the opening whistle against the Reds on Sunday.

But the former EPL and La Liga great didn’t have as big an impact against the in-form Reds as in previous weeks.

Despite leading 1-0 at the break, the Mariners were overrun in the second half and lost 3-2 at Central Coast Stadium.

Hyundai A-League team of the week Round 19

The big talking point was the influence of Garcia and whether he is better suited as an impact player off the bench.

“Luis had been fantastic coming off the bench. His leadership on the pitch was great,” Walmsley told reporters afterwards.

“[But] it’s always harder to start a game. He had some good moments and some good touches but how we utilise him is very important to us.

“He’s going to build on that performance. It was great for him to start for us and the players lift by just having him out on the pitch.

“I look forward to him repeating and putting a little bit more in against Melbourne City next week.”

Garcia was deployed in a false nine role by Walmsley but was unable to stamp his class on the match and link more effectively with speedy wingers Fabio Ferreira or Mitch Austin.

He also picked up a knock which eventually led to the 37-year-old being replaced by Josh Bingham just before the hour mark.

Bingham proved himself to be a real handful when he came on, scoring the home side’s consolation goal late on and Walmsley hinted Garcia may benefit playing in behind the powerful frontman. 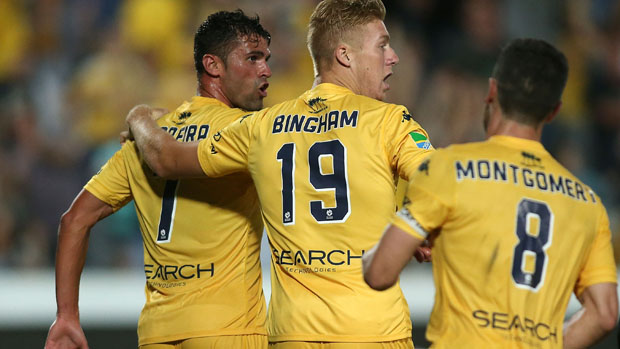 “I’m looking at Josh Bingham and the power that he gives us up there, and the pace we’ve got out wide, Luis maybe playing as a ten is a better option,” Walmsley said.

“At this stage, the idea is to keep building Luis, keep building his engine and keep getting him out on the pitch for as often and as long as possible.

“Providing he gets through a good week at training, hopefully he can light the stadium up down there [at AAMI Park] next week.”

Walmsley said the manner of the defeat would be a great learning curve for his young side.

“We’re leading at half-time against a very good team at home and we’ve got a lot of aspirational young players that desperately wanted to see that game out and have their first clean sheet of the season,” he said.

“You need a lot of conviction to do that. Adelaide is not going to stop playing, they’re going to keep coming, they’ve got good players that can hurt you.

“We need a lot of conviction with and without the ball and that’s still not there but that’s what we need. The second goal took the wind out of their sails but once they got over themselves they finished the game strongly.”

The Mariners – who are now seven points adrift at the bottom of the ladder – get Harry Ascroft back for next weekend’s daunting clash with City.

But with Garcia, Ferreira and Austin lining up against City’s star strikers Fornaroli, Mooy and Novillo, it should be a fabulous clash for the neutrals.