Ahead of next Tuesday’s Westfield FFA Cup Round of 32 clash against Green Gully SC we caught up with our skipper, Nick Montgomery.

Montgomery spoke about the excitement of watching the Westfield FFA Cup on Tuesday night and is looking forward to getting his own taste of the action next week.

There’s no doubt it will be a tough challenge for the Hyundai A-League outfit and Montgomery said the Mariners wouldn’t be taking them lightly.

The Central Coast Mariners are still in the preliminary stages of pre-season preparations and will head to Victoria with a squad of players who are ready for an early battle.

“I watched the games the other night and every time the alarms went off and it flicked over to one of the other games it reminded me of the FA Cup back in England,” Montgomery said. “There are some good players in the State Leagues and for them it’s an opportunity to grab a scalp of an A-League team and impress live on TV. 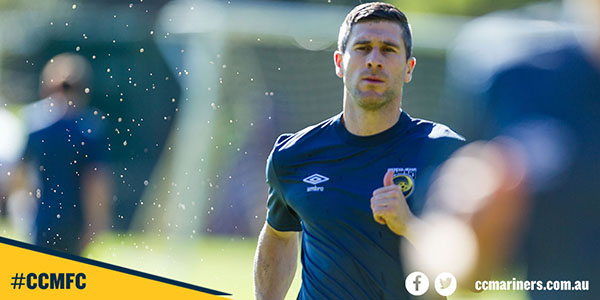 “We’re chomping at the bit for this game, it’s a competitive game early in our pre-season and we’re delighted to be preparing for it.

“Green Gully are a good side, they will be strong and we’re preparing for a battle. If you go there with the wrong attitude in one of these games you’re going to get turned over and that’s something we can’t afford to do, they’ve got a good reputation for a reason so we aren’t taking them lightly.

“There’s pressure on every single one of us to go out there and perform, we will give them the respect they deserve but we go there confident that if we play well we’ve got more than enough in the locker to get through to the next round,” Montgomery said.