Ferreira on Chelsea, Mariners and the Socceroos

Central Coast Mariners’ explosive Portuguese-born winger Fabio Ferreira says he wouldn’t say no to the Socceroos if they ever called on him.

Signed earlier this season from Adelaide United, Ferreira has added an exciting new edge to the Mariners forward line.

He’s quickly become a fan fave in Gosford. And at 25, he’s coming into the best years of his career as he looks to make good on his potential – something the great Jose Mourinho saw a decade ago.

“Living in Australia for three years, I’ve seen a very good improvement in the football here.

“So far it’s been a very competitive league. And in Europe they don’t really realize how competitive of a league it is here in Australia and I think it’s getting bigger,” Ferreira told www.a-league.com.au.

“I’ve enjoyed playing here and [becoming a naturalized Australian and playing for the Socceroos] is something that is possible and I would never say no.”

Ferreira, from the Setubal region of Portugal,  learnt his trade at Portuguese powerhouse Sporting Lisbon.

He played for the Premier League giant’s reserves and made his national youth team debut for Portugal U-19s during his stint in west London between 2005 and 2009.

But like many fringe players at big European clubs, failed to make the first team and was loaned out to lower league English clubs.

Ferreira returned home to spend the next couple of seasons in the lower tiers of Portuguese football before a family connection was the catalyst for him to make the move to Sydney in 2012.

His career was in limbo. But after eight goals in 12 games for semi pro outfit Dulwich Hill it alerted the scouts and a move into the Hyundai A-League with Adelaide came up.

After three years in Australia, the 25-year-old has found the Hyundai A-League and Australia to his liking. Though his experiences in England remain strong.

“The memories I have at Chelsea were amazing and it’s something that will always be a big part of my life.

“I wouldn’t be the player or the person I am if I didn’t go to Chelsea. I learnt a lot and it made me grow as a person.

“My number one goals are to not be injured, to play every game and play well for the team, the club and the fans.”

Stepping into the number 26 jersey, Fabio Ferreira has made an easy transition to the yellow and navy kit with three goals so far.

Settling in to his new surroundings has proven positive for the winger coming off a somewhat tough season for Adelaide United.

“In Adelaide I wasn’t happy anymore, I lost my pre-season due to injury and my contract was ending and I had the opportunity to come to the Central Coast Mariners.” 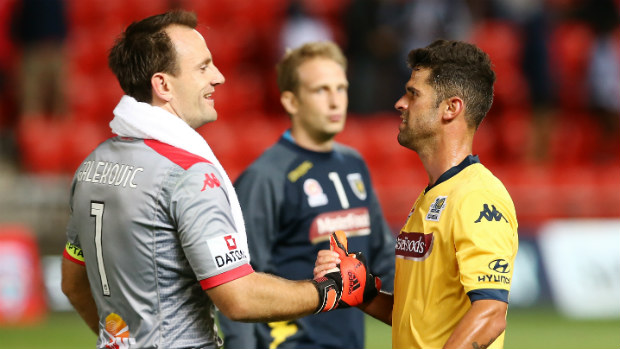 There has been more change than first anticipated for Ferreira with Mariners’ coach Phil Moss stood down shortly after his arrival.

“It’s always hard when there’s a change in coach especially for me because the coach [Moss] was a big part of me coming to the club but the team responded well, that’s how it is in football, you’ve just got to move on and do the best you can.”

Scoring 12 goals for Adelaide, Ferreira claims his best “is never enough” with the recent move linking the winger with some of the Mariners’ best attackers.

“I think [Anthony] Caceres and I make some good combinations and work well with me and the style I play,” he says.

Ferreira’s Latino flair is one way to describe not only his play but his character as he aims to bring something new for the Mariners’ brass band in bay 16 to toot about.

And if “La Flecha” (that’s Spanish for “The Arrow” a nickname given to him by the Latin contingent in Adelaide) and  his goal scoring antics weren’t distinctive enough, Ferreira has added A-League viral video star to his name.

The winger’s recent goal celebration was sweetened by a celebratory smooch from a fan in the stands recently when the Mariners faced Melbourne City FC.

“Oh yes that was my cousin from Sydney. I knew they were sitting there so I purposely ran over there.

“I’ve had a lot of questions about that, even from my team mates so even I had to watch the video.”

**See Ferreira this weekend in what is set to be club skipper John Hutchinson’s final game in Gosford when the Mariners face the Wanderers on Saturday night.