Head Coach Tony Walmsley wants to “own” Hunter Stadium, Roy O’Donovan said the Jets “park the bus” and Nick Montgomery knows the importance of the #F3Derby. Let’s take an insider look at the first #F3Derby of season set to be played at Hunter Stadium on Saturday night.

This season’s first #F3Derby looks set to be the best for years with Scott Miller’s rejuvenated Jets up against Tony Walmsley’s dynamic Mariners this Saturday at Hunter Stadium.

KO is 5.15pm! Have you booked your spot on one of the buses? CLICK HERE for more info.

Both coaches are newbies to the #F3Derby, but have each signalled the esteem they hold the local rivalry in, with Mariners boss Tony Walmsley calling on the Yellow and Navy to “take over and own” Hunter Stadium on Saturday.

Another new face to the #F3Derby stage is Mariner Roy O’Donovan and the attacker has been quick to express his indifference to the Jets’ game plan.

“They play very defensively, they don’t play a very expansive game so we don’t know what to expect going up there, so it’ll be a challenge,” O’Donovan said.

“We played them a couple of times in pre-season and they pretty much park the bus so it’s ugly.

“If I was a supporter I wouldn’t go and watch it, but you know that’s the way they want to play, so that’s fine.” 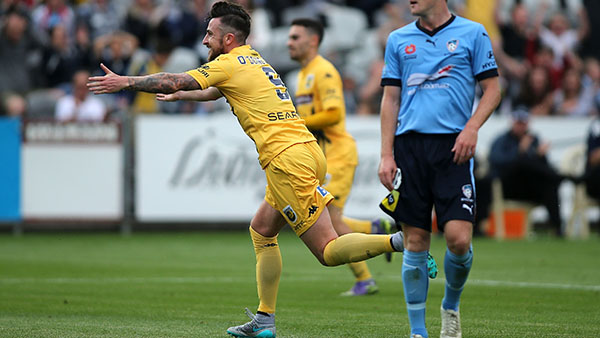 History however is stacked heavily in the Mariners’ favour this weekend. It’s been just under 1,120 days since the Mariners last lost to Newcastle on October 20th 2012.

In that time we’ve won a Championship, embarked on two AFC Champions League campaigns and seen three players from the side that day go on to play for the Socceroos (Mat Ryan, Trent Sainsbury and Tom Rogic).

In that time Newcastle haven’t played a final and bagged a wooden spoon.

After three fairly lifeless #F3Derby encounters last season, let’s hope this will be the one to renew the fire of the Hyundai A-League’s original derby.

Last week, the Mariners put in a fighting second half performance to claim a share of the points against Wellington Phoenix at Central Coast Stadium.

The Irishman levelled for the Mariners with a terrific header in the second stanza after Michael McGlinchey scored early for Wellington.

Stats wise, the Mariners once again wreaked havoc on goal with a number of chances, but were unable to knock in what would have been a deserved winner.

On the other side, the Jets have been this year’s surprise packet and sit third with three wins and two losses.

The loss of playmaker Fabio Ferreira will be a massive blow for the Yellow and Navy this weekend, however Nick Fitzgerald will return to the fold and offer an ideal replacement in the front third for the Mariners.

Thanks to the likes of Fitzgerald, the Mariners have been one of the most penetrating sides in the league this season and the Jets will be highly likely to “park the bus”.

“I’ll never forget my first derby, it’s an eerie atmosphere, a build up of pressure, 100 mile an hour, any derby is a special game and tomorrow’s no different.”

“It means everything, we’ve had some really good form and don’t feel like we’ve picked up as many points as we deserve but that’s football – we don’t complain about it, we just get onto it.”

“Scott Miller has them well organised, two banks of four, they sit back and defend and try and counter, so we’ve got to be cautious of that.”

“[danger men] Without a doubt, my friend David Carney, I played with him at Sheffield United for a few seasons, amazing left foot and on the ball he’s dangerous so we need to stop him so I look forward to giving my mate ‘Carnes’ a good kick.”

“We’re in good form, we just need to get the results to match where we’re at and there’s no better game than this derby,

“I like playing with a partner (up front), you’ve got Bingers (Josh Bingham), you’ve got Heff (Dan Heffernan), so either one, a target man to play alongside me would be great, with a bit more service it takes the weight off a little bit.

“581 days means nothing to me… I’ve had two away losses, that’s enough for me, so coming into this game, Newcastle is the most important game of the season for us so hopefully we can put that two game loss to bed.”

This match never reached great heights and ended goalless. Newcastle had the best opportunity of the game, coming quite literally centimetres from scoring with the ball not fully crossing the line thanks to a Mitch Cooper strike.