Everything you need to know about Pink Round!

This Sunday our boys are wearing bright pink against Sydney FC in support of women’s cancer research, prevention and support services.

To make your day as easy and enjoyable as possible we’ve made a list of everything you need to know about this Sunday’s blockbuster clash against Sydney FC. 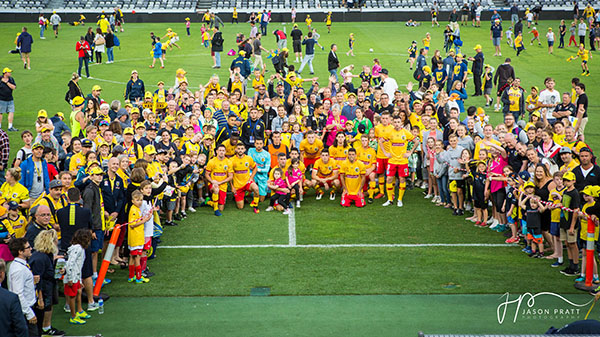 Join us for a kick on the field after the full time whistle!

Why are we wearing pink?

Since 2012 the Mariners have raised almost $70 000 by donning pink jerseys, followed by an online auction of the kits along with bucket collections and other collaborative fundraising initiatives between the Mariners, Cancer Council NSW – Central Coast and Brightfield Group Services.

Who are Brightfield Group Services?

Brightfield are the match day sponsor for Sunday’s game for the third consecutive season!

Brightfield offer flexible, specialist facilities management solutions tailored to each individual client and business – will have their brand re-appear on the Club’s pink kits and team up with the Mariners to help raise awareness and funds towards the prevention of women’s cancer.

Brightfield are also calling on Mariners Members & fans to follow them on social media! If Brightfield can manage 200 followers on Twitter and 200 likes on Facebook they will donate $500 to Cancer Council NSW – Central Coast so make sure you get around them!

Any Mariners or Sydney FC supporter that books a domestic or commercial pest treatment before 31/03/2017, Brightfield Group Services will donate 20% of the Invoiced Price to Cancer Council NSW!

The Central Coast Mariners, Cancer Council & Brightfield are calling on all Mariners supporters to wear pink in support of women’s cancer research, prevention and support services.

The action starts at Central Coast Stadium from 2:30pm with our pre-game function at the Gosford Bowling Club (next to the Eastern Gate).

Thanks to the Six String Brewery and Central Coast Leagues Club our Pre-Game Function will be hosted in the Gosford Bowling Club where you will be able to try the Coast’s best craft beer thanks to Six String Brewery whilst hearing from Head Coach Paul Okon, CEO Shaun Mielekamp and non-playing Mariners players.

The Central Coast Mariners will handpick some supporters dressed in their pink get ups to take part in a game of ‘three legged-football’! You also must be dressed in pink to be eligible to win the MasterFoods hamper give away on Sunday as well as a chance to fire our iconic cannon!

Make sure you’re in the stadium for a special edition of big screen karaoke by one of our foundation Members. The track should be quite aa familiar one and we’re encouraging everyone to singalong!

The fun doesn’t stop at the full-time whistle! Join us for a kick on the pitch at Central Coast Stadium that will be signalled by a siren approximately 10 minutes after the game finishes.

Once you enter the pitch your first port of call will be taking part in our family photo! If we draw or win, all players will gather at the front of the tunnel and our supporters will be asked to join us on half way to feature in the family photo with our Mariners stars.