The Central Coast Mariners have signed an MOU with Coast Shelter that will see the two organisations team up on a range of community initiatives on the Central Coast.

Signing on as one of the Club’s official Community Partners, the Central Coast Mariners will endorse and help raise funds and awareness for the multitude of incredible community initiatives carried out by Coast Shelter.

On Tuesday night at Pluim Park the Central Coast Mariners will play the first pre-season match of their Hyundai A-League 2016/17 campaign against some of the local Central Coast’s best players. Entry to the match is a gold coin and all profits will go to Coast Shelter.

Coast Shelter is a not-for-profit charity based on the NSW Central Coast, which provides accommodation and support programs for people who are homeless or at risk of homelessness.

Coast Shelter has been operating for over 20 years and provides accommodation to over 150 men, women, families and youth every night. In addition to this, Coast Shelter also coordinates the provision of over 1,000 free meals every week through the Coast Community Centre.

Coast Shelter has ten separate programs, which work together to achieve their mission of ending homelessness on the Central Coast. These programs include mens, women’s and children’s refuges all over the coast. 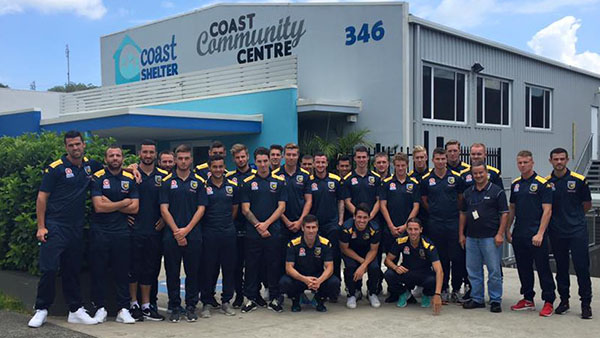 “To be able to join our football club, The Mariners, in raising awareness of poverty and homelessness in society is indicative of the Central Coast’s generosity and commitment to our fellow citizens.” Laurie Maher Executive Officer of Coast Shelter said.

“Domestic violence and homelessness are a blight on our society and it’s great to have the Mariners join us in raising these issues.

“To have the Mariners join us in raising awareness of the many people in our community doing it tough is just fantastic.” Laurie Maher Executive Officer of Coast Shelter said.