New arrivals Blake Powell and Connor Pain, plus Portuguese winger Fabio Ferreira combining with Roy O’Donovan up front has the Irish striker excited ahead of Season 2016/17 in the Hyundai A-League.

“Obviously, Blake’s playing as a number 10 this year, and we’ve got Connor and Fabio on the wings, so hopefully it’s going to be a good production line for me.”

O’Donovan scored eight goals in 19 games for the Mariners last season, though an eight-game suspension reduced his opportunities. 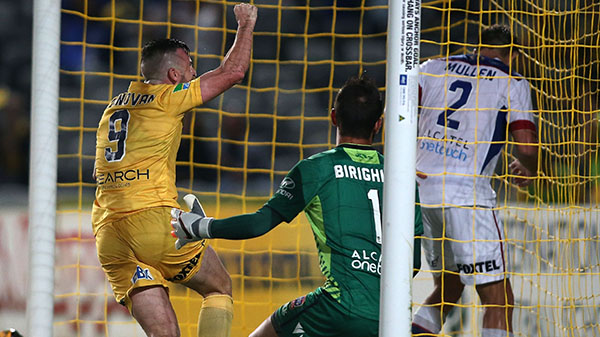 The 31-year-old former Sunderland player believes Central Coast’s speed and movement up front will cause opponents problems this campaign, with both Powell and Ferreira capable of leading the line for Okon’s side.

“If the four of us are on the same wavelength there should be no reason why each and every one of us can’t play in each other’s position at times in a game,” O’Donovan said.

“I don’t think there’s any problem if Blake wants to run in behind and I can drop in or vice-versa if Fabio wants to come off the line and I’ll drift out or Blake drifts out.”

And O’Donovan is convinced Central Coast Mariners are “heading in the right direction” under new coach Paul Okon as they look to bounce back.

Okon took over from Tony Walmsley in early August and the former Young Socceroos boss has quickly made a good impression on O’Donovan and the rest of Central Coast’s squad.

O’Donovan is confident Okon’s ideas and the addition of Senegalese pair Jacques Faty and Mickael Tavares will ensure the Mariners are more difficult to beat in the upcoming season.

“[Last season] every game we seemed to be ahead in and doing well in, we couldn’t get over the line and win football matches, which was very frustrating from my point of view,” the Irish striker said.

O’Donovan added that he has been impressed by Okon’s hands-on approach.

“He’s not standing back as a manager. He’s in amongst it,” O’Donovan said.

“If he’s got a point to prove or something to say he says it there and then and he coaches his point and I think that’s very important.

“It’s very important for players to have a sense of clarity and know what direction that the manager wants to take things.

“So far, so good. The young lads have really taken on board [Okon’s ideas], as have the senior lads.

“With Tony going and ‘Hutch’ [former assistant coach John Hutchinson] going, it was difficult because they have obviously built up so much trust with the players.

“But it’s a cut-throat business and Paul has taken on the mantle now and is so far is going really well. Everyone’s really excited about the season ahead and the style of football we want to play.”

The Central Coast Mariners  kick off their season on October 8 away to Perth Glory.