In an exciting day for Central Coast Mariners’ supporters the club today unveiled the home kit that will be worn during the Mariners’ Hyundai A-League 2016/17 campaign.

Compared to last season’s bold kit that was yellow from top-to-toe with a palm tree front and centre, the Central Coast Mariners have worked closely with Umbro on a classic design that features a striking navy stripe and navy socks. 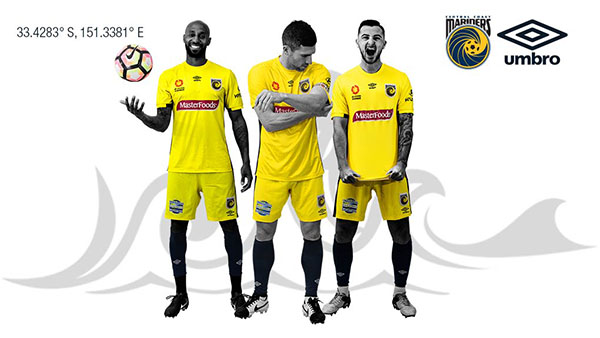 Mariners’ fans with an eye for detail will also notice the co-ordinates featured on the top of the neck of the new Umbro playing shirt. These numbers are the latitude and longitude of Central Coast Stadium in Gosford – so even when the Mariners are in action away from home the players and fans will carry a little bit of the Central Coast with them, wherever they go.

The pattern above the coordinates is inspired by the waves of the idyllic beaches on the Central Coast.

However, our loyal palm tree enthusiasts will not be disappointed as the jersey boasts four iconic palm tress on the back of the shirt that stand proudly above the words ’community club’.

In June, the Central Coast Mariners announced that Umbro would be the Club’s official kit supplier for at least the next two Hyundai A-League seasons. 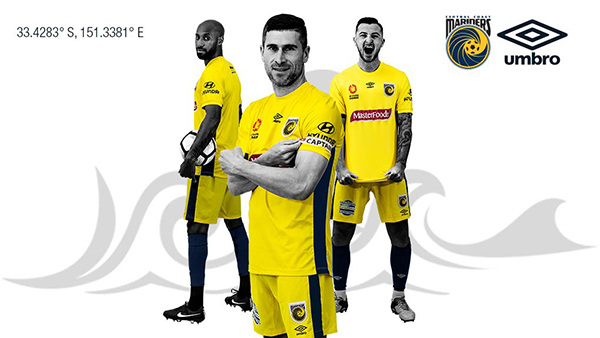 The iconic football apparel, footwear and equipment brand are responsible for the kits of Everton (England), West Ham United (England) and the Irish national team to name a few.

The kits were launched at the Entertainment Grounds in Gosford at the Gosford/Erina and Coastal Chamber of Commerce Business Luncheon today.

Central Coast Mariners’ CEO, Shaun Mielekamp spoke about the Mariners’ excitement of the upcoming season and unveiling of the club’s new kit. 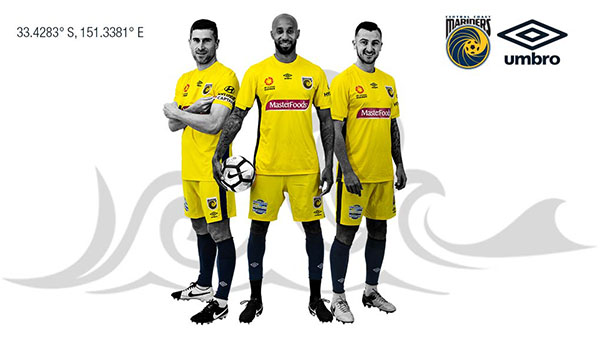 “The unveiling of our new kit is another reason to be excited for the Hyundai A-League 2016/17 season,” Mielekamp said. “We would like to thank Umbro for delivering a classic design that is a striking bright yellow.

“We are also delighted to proudly wear the MasterFoods logo on the front of the home jersey for another Hyundai A-League season. MasterFoods have occupied this space since the Championship winning season and represents our longstanding relationship with the coast-based business.

“This is an enthralling season for the club that also provides an ideal opportunity for new corporate partners to come on board. We are in the market for co-major partnerships that include branding opportunities on the front of our away jersey as well as the sleeve for the upcoming season.

“The navy colouring represents the unknown and exciting opportunities when travelling away but with the co-ordinates and palm trees of Central Coast Stadium stamped on the top of the neck, we will take a small piece of the Central Coast with us wherever we go.

“Our new jersey is bright but our future is even brighter,” Mielekamp said.

Central Coast Mariners supporters can pre-order their new home kits without a financial commitment  by CLICKING HERE. The registration will also grant access to an opportunity to take part in a team photo at the club’s ‘Family Day’ that will be held on the October long weekend. 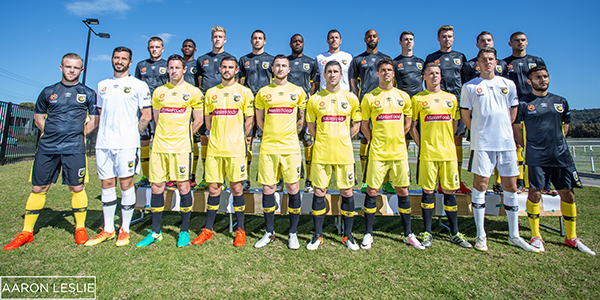