Today at the Central Coast Mariners Centre of Excellence Jordan Tsekenis and Jeremy Habtemariam who are both 19-years-old from Canberra Olympic along with 20-year-old Andrew Slavich from Tuggeranong United completed their first full session with the Mariners.

Luka Ujdur from Belconnen United FC is the coach who is also plying his trade under Paul Okon on the Central Coast as a part of the Capital Draft initiative that exposes stand out players and coaches from Canberra to the Mariners full time professional set up.

The four Canberra based prospects were together at training for the first time today after Tsekenis’ & Habtemariam’s dream Westfield FFA Cup result that will now seem them face Sydney FC in the final four of the cup competition.

Down to 10 men in the 94th minute, Habtemariam sensationally drew a penalty that ultimately sent Canberra Olympic through to the Westfield FFA Cup Semi-Final.

Habtemariam said that spending a week with the Mariners would help Olympic’s preparation for the club’s cup tie and was looking forward to learning from the likes of Mickael Tavares.

“Tuesday night was unreal, no one believed that after going down to 10 men that we could get a win but the boys kept working,” Habtemariam said. “This will 100% help us, you can’t get an experience like this, coming here and training with a full time professional team so I think we will be much better prepared.

“When we played in Canberra against the Mariners Tavares was silky in the middle of the park and out here he is the exact same here so he has to be one of my favourite players here,” Habtemariam said.

Habtemariam’s Olympic team mate, Jordan Tsekenis said that the opportunity created by the Capital Draft will excite all footballers in Canberra who are ambitious to get a crack in the Hyundai A-League.

“This is crazy, you don’t expect to get a call up to trial with the Mariners but it’s great to get in and train with one of the most successful teams in the history of the league,” Tsekenis said.

“Before training I was nervous but once we started kicking the ball around I felt comfortable, this opportunity provides a pathway out of Canberra which is important because we don’t have an A-League team so this is a great opportunity for us,” Tsekenis said.

“If the Mariners keep coming down to Canberra and looking at players it’s a something down there that younger players can look forward to and aspire to,” Tsekenis said.

Slavich spoke about the importance of testing himself against Hyundai A-League players and taking what he learns back to Canberra.

“It’s been unreal, the biggest difference is the speed of the play, here it’s about 10 times quicker than I am used to back home so mentally and physically you need to be faster,” Slavich said.

“Connor Pain is a player that I will look to learn from whilst I’m here, he’s quick on the ball with a killer shot which is great to watch in person and learn from a player like him. What I can learn here in a week I would maybe learn in six months back home so it’s important that I take it all home with me,” Slavich said.

Belconnen United’s Head Coach, Luka Ujdur arrived with an air of uncertainty but cannot believe the access he is being granted by Paul Okon and his coaching staff. 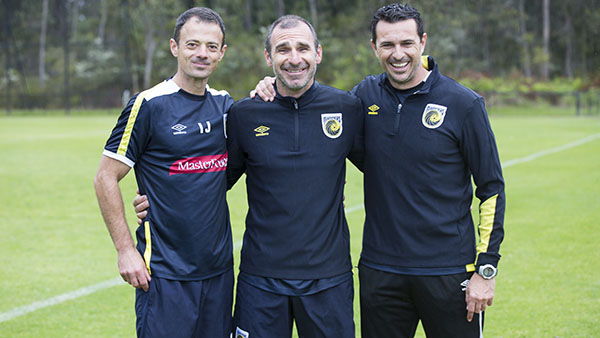 “This is a fantastic opportunity to see a professional set up compared to our amateur set up,” Ujdur said. “This is an honour, I watched Paolo play when I was younger and I know Ivan Jolic so it has been great to watch Paolo and the way he manages his players, it’s been phenomenal.

“Being able to see Paolo & Ivan’s philosophy is a great experience and something that leaves a footprint with me because teaching is about learning and learning is about teaching and I can’t thank the guys enough for being so open and transparent with me.

“Initially I expected to be on the outer watching in and thought it could have been a waste of time but it hasn’t been, it’s been a really incredible experience, Paolo has been open to answering anything that I’ve asked him.” Ujdur said.