THIS SATURDAY the Central Coast Mariners Foxtel National Youth League team will play for a spot in the Grand Final to be hosted at Central Coast Stadium.

The Mariners Youth face Sydney FC Youth in the final match of the Foxtel National Youth League regular season at the Central Coast Mariners Centre of Excellence, Tuggerah. Kick-off is 4:00pm on Saturday and entry is FREE.

If the Mariners win, their Grand Final will be played at Central Coast Stadium as a curtain raiser to our next home match on Saturday January 28 against Melbourne City Youth who finished first in Conference A.

Mariners Youth Captain, Steve Whyte said that it’s been an exciting week of training and credited team morale for a run of form that has seen them go six games undefeated.

“The mood has been good in the camp this week,” Whyte said. “All the boys are buzzing for the game on Saturday, everyone’s really positive which makes for a great vibe at training.

“Team morale has been extremely important this season – myself and a few of the older boys have done our best to welcome the players who have come in from outside the area with open arms. We have bonded well, work hard together and I think everyone feels like they are right at home,” Whyte said.

The Mariners Youth played out an exciting 2-2 draw with Sydney FC Youth in round four of the competition and Whyte said they will be well prepared for the challenge, praising Head Coach Ben Cahn.

“We expect a Sydney side who will be quick on the counter,” Whyte said. “But we’ve shown this season that we can deal with any team and adjust well regardless of what the opposition throws at us so we are ready for it.

“Ben Cahn has been very good to play under. “The most important thing is that he’s always believed in me and gives me plenty of confidence which is the main reason I am here today,” Whyte said.

Whyte is calling on all Mariners supporters to get out and be the difference at the Central Coast Mariners Centre of Excellence on Saturday.

“Playing at home is a massive confidence boost for us, if we get a good crowd it’s just great to know that we have the fans backing us. This is like a semi-final for us so I hope the supporters turn up in good numbers because it will be an exciting game,” Whyte said.

With Saturday looming and the team at full fitness, Cahn spoke about the positivity of selection headaches ahead of his team’s clash against Sydney FC.

“We handled most of our conditioning work early in the week so now we’re preparing specifically for the game and there’s a lot of excitement in the group, a lot of anticipation for the game and even some nerves,” Cahn said.

“It’s never easy to leave people out of a team but ultimately it’s much nicer to be in a position where players will be left out. Good quality players and good quality people so it’s the old cliché – a nice headache to have,” Cahn said.

With the possibility of Hyundai A-League players being deployed for both sides Cahn said that coaching in the FNYL Competition means that you often need to be dynamic in the approach to game day.

“It’s part and parcel of the FNYL that A-League players are eligible to drop down and play,” Cahn said. “So it’s something every week we need to manage – you don’t really know who’s going to line up against you until you see the team sheet on the day.

“Most teams, us and Sydney included, generally have a similar playing style regardless of which players they have,” Cahn said.

With the team’s final training session done and dusted this morning at the Centre of Excellence, Cahn said the number one priority of the FNYL Competition is player development and is proud of how his players have progressed across the eight-game season. 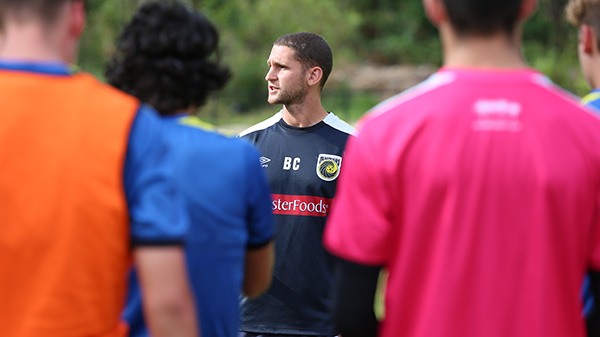 “The main message this week to the players has been to believe in themselves and enjoy the game because they’ve worked incredibly hard to give themselves a shot at the Grand Final,” Cahn said. “Ultimately the main priority here is the individual development of the players and we’ve made huge strides, there are a lot of players who have come a long way in a short period of time.

“Yes we want a good result, yes we want to play in a Grand Final but if it doesn’t work out we can still be comfortable that we’ve done a good job and our players have shown real improvement,” Cahn said.