Cahn: The boys are flying

The Central Coast Mariners Foxtel National Youth League side are flying high at the top of the table and boast a good chance of making a Grand Final berth with just two rounds remaining.

As it stands, the Mariners have a bye in the second last week of the competition and next week face Sydney FC in the competition’s last round. To qualify for the Grand Final, the Mariners will hope that Sydney can take points from Newcastle this weekend which would allow the Yellow & Navy qualify with a win over the Sky Blues at the Central Coast Mariners Centre of Excellence on Saturday 21 January.

Head Coach Ben Cahn credited the morale of his squad but admitted they are not looking too far ahead at this stage.

“The season is going well,” Cahn said. “We started slowly with a loss to the FFA Centre of Excellence but three draws followed that and we’ve now won three in a row so the boys are flying at the moment.

“We’re reliant on one result this weekend between Newcastle and Sydney to go our way and hopefully it does and the future is in our hands when we play Sydney.

“We’re not thinking too far ahead, we’re just trying to focus the boys on the process of everyday training and their own development so if the Grand Final comes it comes, hopefully it does but more importantly it’s about what they’re doing day-to-day and where they’re going long term in their careers.

“We’ve got an unbelievable group of boys who have forged a real closeness. They really work hard for each other, despite competing with each other for first team contracts they support each other a lot. The boys who don’t make the team turn up and support the team with a good attitude and the boys that do play support the ones who aren’t, so it’s a great environment. 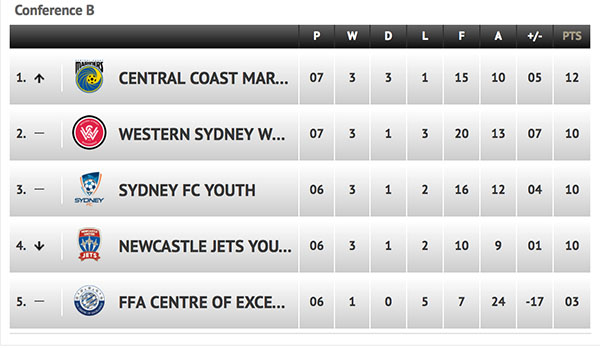 Heading into a bye weekend, Cahn said his side will not use it as a reason to switch off – lifting training loads to ensure the Mariners are fighting fit ahead of their final fixture.

“We don’t want to lose physical condition without playing so we will up the intensity of training this week and moving into next week we will know what we need to do leading into the match against Sydney FC,” Cahn said.

There have been a range of standout performances this season and Cahn also mentioned that there could be some representative honours on the horizon for some of his younger players.

“It’s hard to pick out individual performances because there are boys stepping up every week but there’s two young boys, Gianni Stensness and Peter Kekeris who are both on the fringe of the next Young Socceroos camp which is really positive,” Cahn said. “Obviously, some of the older boys are names that people already know like Lachie Wales, Steve Whyte and Reece Papadimitrios who’s influence on the team is huge as they develop every day.

This is the second season of the eight-game Foxtel National Youth League format but Cahn suggested there could be reasons for that season to be longer, giving young players more game time.

“I’m an advocate that the Foxtel National Youth League season should be a longer competition,” Cahn said. “The unpredictability of it makes it good – one week you might play a team of 16-year-olds and the next you might play almost an A-League reserve team so there’s lots of learnings in it for the boys and great experience.

“You’re playing against the best level of youth players in the country with the odd A-League player thrown in there which is great,” Cahn said.