The Central Coast Mariners can today confirm the signing of exciting attacker, Blake Powell who has put pen to paper on a two-year-deal with the Yellow & Navy.

The Central Coast Mariners can today confirm the signing of exciting attacker, Blake Powell who has put pen to paper on a two-year-deal with the Yellow & Navy.

Following his departure from Wellington Phoenix due to personal reasons that required Powell to return to NSW to be closer to his family, the 25-year-old has joined what will be his third Hyundai A-League Club that also includes Sydney FC.

During his time at Wellington Phoenix, Powell found the back of the net on eight occasions from 23 Hyundai A-League appearances with the New Zealand based outfit.

Australian football fans will fondly remember Powell’s four-goal haul against Western Sydney Wanderers at Parramatta last season where he had a hat trick to his name after just 33 minutes in round 19 of the Hyundai A-League. Powell added a fourth to his tally in a day that saw the striker record the second fastest hat trick in Hyundai A-League history.

Blake Powell has arrived on the Central Coast and commenced training with his new teammates, where he is looking to build on his Hyundai A-League goal tally from last season. 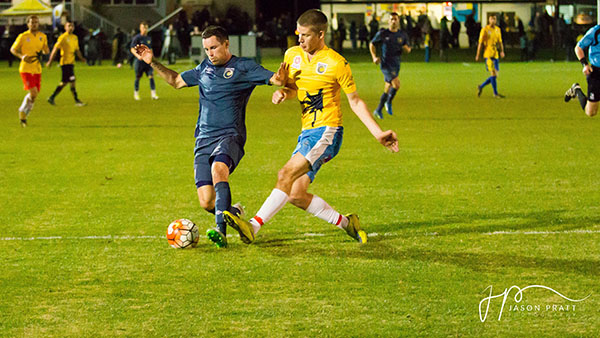 Identified as a versatile player who can feature anywhere in the attacking stocks, Powell is a coup for Tony Walmsley’s new-look squad and will be eying off the FFA Cup Round of 32 fixture against Green Gully.

“I’m a goalscorer, I want to score more goals than I did last season and be competitive with the team to push for a finals shot,” Powell said.

“At the moment Tony has been playing me as a number 10 in a play maker’s role and I’m liking the amount of freedom and getting a lot more touches on the ball.

“As a striker the ball might not come to you as much so it’s been good, we played on Tuesday night so I am looking to build on the combination play between Roy & Fabio.

“That was the first game I’ve played with Roy and in time I think that combination will work really well,” Powell said.

Powell thanked Wellington Phoenix for his time at the club and their understanding of his situation.

“I’ve been dealing with some family issues at the moment and Wellington were very respectful and supported my decision to come back home and be closer to my family.

Head Coach Tony Walmsley is excited at the recruitment of his newest attacking weapon.

“Blake Powell has proved himself to be a goal scorer at both Sydney FC and Wellington Phoenix and gives us a point of difference as a second striker or number 10,” Walmsley said.

“Blake is a hard worker; has great pace and makes smart forward runs.

“When we heard he had returned to NSW for family reasons and had been released by Wellington it made sense to make an approach and I’m delighted to be able to add him to our attacking options for the next two seasons,” Walmsley said.