The Central Coast Mariners are excited to announce the signing of experienced goalkeeper Ivan Necevski who has penned a one-year-deal with the Yellow & Navy ahead of Hyundai A-League Season 12.

The Central Coast Mariners are excited to announce the signing of experienced goalkeeper Ivan Necevski who has penned a one-year-deal with the Yellow & Navy ahead of Hyundai A-League Season 12.

Necevski arrives on the Central Coast from Sydney FC, a club where he made 45 Hyundai A-League appearances, on top of his three caps for the Newcastle Jets during the 2006/07 season.

The 36-year-old shot stopper also had the privilege of featuring against Barclays English Premier League giants, Tottenham Hotspur FC when the London based club played Sydney FC in May 2015. 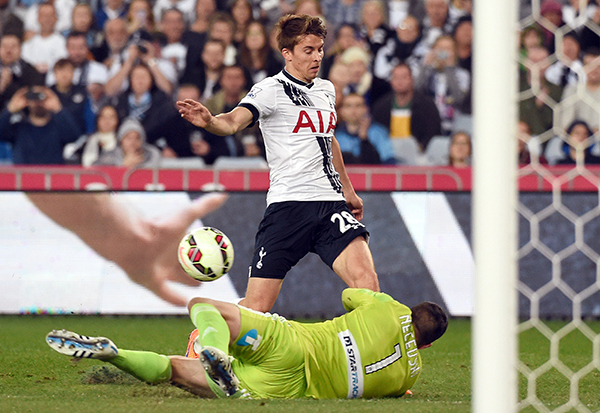 Have you renewed your Membership for the upcoming season? All Members from last season have an opportunity to renew exclusively under earlybird pricing.

Necevski visited the Central Coast Mariners Centre of Excellence today to sign his contract and looks forward to the upcoming challenge.

“This is a new start for me in fresh surroundings and I’m really looking forward to getting into pre-season training and excited for this challenge,” Necevski said. “I’ve known Matt [Nash] for well over 10 years now so when the offer was proposed for me to come up here I originally spoke to Nashy and it went from there but I am really looking forward to working with him.

“I’ve only had great reports about the facilities and the people on the Central Coast, I am a little bit nervous to be honest but as much as I am nervous I am excited.

“The goalkeepers who are already here are the future of goalkeeping in this country; we need to push each other very hard at training for the number one spot and get the best out of each other,” Necevski said.

Necevski made his first Hyundai A-League appearance for Sydney FC in 2007 at Central Coast Stadium against the Mariners that saw the two sides play out a 5-4 thriller where Mile Jedinak, John Aloisi and Adam Kwasnik all featured on the scoresheet. Necevski remembers the match fondly.

“I remember it like it was yesterday,” Necevski said. “We played in front of a huge crowd at Bluetongue Stadium in a game that will go down as one of the greatest games in A-League history so hopefully we have a lot more games like that coming up in some big derbies this season,” Necevski said.

“Ivan arrives on the Central Coast to compete for a number one spot, he has 10 years experience in the Hyundai A-League and will be great for the change room,” Nash said.

“Ivan is a great person, he will fit in perfectly with the culture at the Mariners and is a great character to have around.

“He is a big presence at the back and has been fighting for a number one spot for many years, so that will make for great competition at the Club,” Nash said.

The Central Coast Mariners can also confirm that the contract of goalkeeper, Alastair Bray will not be renewed beyond the Hyundai A-League 2015/16 season.

Bray, who joined the Mariners as a January transfer window recruit made his Hyundai A-League debut for the Yellow & Navy against Adelaide United in round 15.

The Central Coast Mariners would like to wish Alastair all the best in his future endeavours.