The Central Coast Mariners have welcomed back Kwabena Appiah who returns to the Yellow & Navy, a club where he had his first taste of professional football as a part of the Foxtel National Youth League set up in 2011.

The Central Coast Mariners have welcomed back Kwabena Appiah who returns to the Yellow & Navy, a club where he had his first taste of professional football as a part of the Foxtel National Youth League set up in 2011.

Identified and recruited by Tony Walmsley in 2011 as a 19-year-old, Appiah won the 2011/12 Foxtel National Youth League Championship alongside the likes of Anthony Caceres, Mitch Duke, Bernie Ibini and Tom Rogic to name a few. 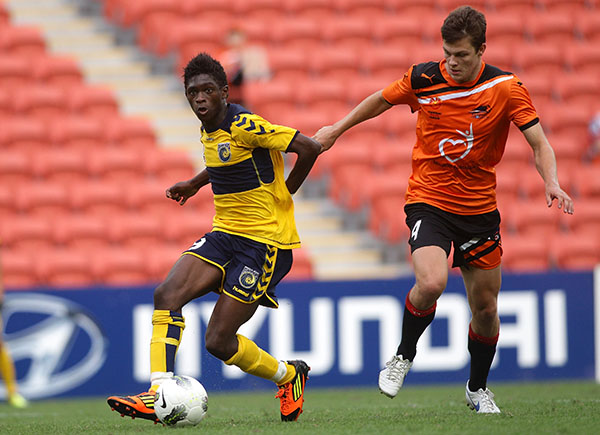 Whilst on trial with the Yellow & Navy this pre-season, Appiah has impressed the Mariners football department with his physical attributes and motivation to succeed.

Appiah couldn’t be happier to be back on the Central Coast and was blown away by the facilities upon his return. Appiah also spoke about his hunger to play Hyundai A-League football for the Yellow & Navy.

“It feels really good to be back, everyone has welcomed me with open arms,” Appiah said. “It’s very different to when I was here [in 2011], the set up is incredible and it actually took my breath away, it’s a very professional environment.

“Tony [Walmsley] was the one that took me from playing in the State League and I ended up in the Mariners youth team, he’s helped me a lot and I am forever grateful for the opportunity he gave me back then and the opportunity he is giving me now.

“I wanted this reunion earlier but I’ve been elsewhere and at the end of the day I am finally back here which feels unreal.

“Tony, Hutch and the rest of the staff have been fantastic and I will do everything that I can to repay that faith.

“After winning the Youth League with the Mariners back in 2012 with an incredible team I was faced with a tough decision. Staying with the Mariners or going back as one of the first signings for Western Sydney Wanderers, which was an opportunity, that I couldn’t refuse.

“To be honest, when I left Western Sydney there was only one A-League club I wanted to go to and that was the Central Coast and at the moment I am finally where I want to be.

“My goals for this season are to do well in pre-season, earn that chance, cement a spot in the starting XI and finally score some A-League goals,” Appiah said.

Central Coast Mariners fans will be pleased to hear that Appiah bagged his first goal for the club in a pre-season match on Tuesday night against the Academy after just 10 minutes. 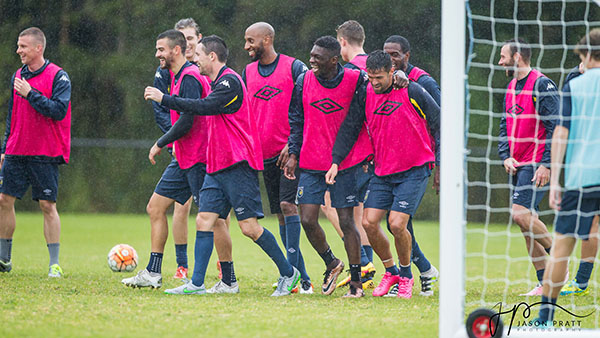 ‘Kabsy’ has settled right in with his new team mates.

Walmsley is confident that Appiah can fulfill his potential on the Central Coast and is impressed with his physical condition.

“Kwabena has a lot of experience for a young player, including being voted player of the ACL campaign for the Wanderers in 2014 when they were crowned Champions of Asia,” Walmsley said.

“We are confident that this is a perfect environment for him to fulfil his potential. He is ambitious and always wanted to play for the Central Coast Mariners and his recent contribution as a trilaist has warranted him with a short-term contract.

“He had a very good trial period, fits our attacking philosophy with outstanding physical attributes and holds a desire to refine his game,” Walmsley said.

Kwabena Appiah has signed a one-year-deal with the Central Coast Mariners that will see him remain at the club until at least the end of the Hyundai A-League 2016/17 campaign.