Football Federation Australia has today announced the Hyundai A-League 2015/16 Draw. The Central Coast Mariners are excited to head into a Season 11 that includes the return of our iconic New Year’s Eve clash, six NSW derbies at Central Coast Stadium and 13 home matches to be played at Gosford.

The action kicks off on October 10 with a home game at Central Coast Stadium against Perth Glory where Nick Montgomery will lead out our boys for the season’s first Hyundai A-League encounter. Our regular season campaign will be rounded out at home with our final fixture of the season on April 9 against the Newcastle Jets in an #F3Derby.

Are you IN? Click here to renew or sign up for a Hyundai A-League 2015/16 Membership. The full draw can be viewed at the bottom of the page.

A headline feature of this season’s draw is double the amount of home NSW derbies compared to last season that will see us face off against Western Sydney Wanderers, Sydney FC and the Newcastle Jets two times each IN the Central Coast.

Members and fans can also look forward to plenty of Mariners’ action over the festive season with a battle against Western Sydney Wanderers locked in for the Australia Day long weekend where our boys will feature in front of a packed out Central Coast Stadium on Saturday January 23, 7:30pm kick-off.

When it comes to away fixtures, at the top of the list sits a Boxing Day blockbuster against Sydney FC at Allianz Stadium.

The Central Coast Mariners have also worked in collaboration with Melbourne Victory to take the beautiful game to Geelong where we will face off against the reigning Champions at Simonds Stadium.

Shaun Mielekamp, Central Coast Mariners CEO spoke optimistically about the Mariners’ side of the draw and revealed the advantages of our round 14 clash in Geelong.

“It is fantastic that we have regained our New Year’s Eve fixture and this is one that we are proud to highlight as one of the must see events on the Central coast each year,” Mielekamp said.

“A lesson has been learnt and we expect that the New Year’s Eve match is never forgotten about again. We will be lobbying the FFA to get some commitment on this as a permanent fixture not only for the next few seasons but also for every season moving forward.

“The Saturday night match against the Wanderers on the Australia Day long weekend is yet another big win in the draw that we are confident will sell out, hence why membership becomes an important decision for all fans to join in.

“I can’t wait until October 10th and see the Yellow Army in full voice, helping us join in together for an exciting season ahead, Mielekamp said. 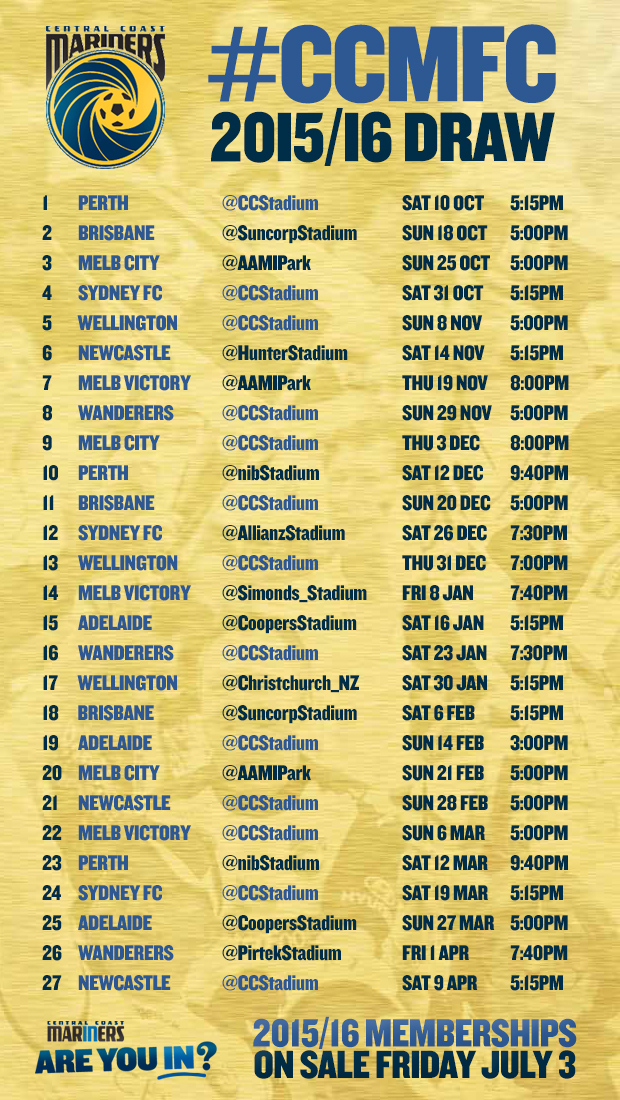