The Central Coast Mariners can today confirm the signing of 28-year-old striker Daniel Heffernan who will join the Yellow & Navy from PlayStation 4 NPL Victoria outfit, Heidelberg United FC on a one-year-deal.

The Central Coast Mariners can today confirm the signing of 28-year-old striker Daniel Heffernan who will join the Yellow & Navy from PlayStation 4 NPL Victoria outfit, Heidelberg United FC on a one-year-deal.

The signing comes as great news to Mariners Members and fans who fondly remember Heffernan for his quick-fire hat trick in early August against the Western Sydney Wanderers whilst he was on trial with the club during a pre-season match in Coffs Harbour.

Since Heffernan’s trial spell with the Mariners, the prolific Manchester born front man returned to play for Heidelberg in the Victorian NPL and Westfield FFA Cup.

Most recently, Heffernan was the FFA Cup hero for “The Bergers” when he scored the quickest goal in Cup history after just 26 seconds which helped his side to a 2-0 win over Sydney United 58 and a spot in the quarter finals.

After three seasons in the NPL and a trial with the Mariners, Heffernan has penned his first professional contract and Head Coach Tony Walmsley spoke about the versatility that “Heff” brings to the squad.

“Heff is a proven goalscorer over a long period of time and gives us a point of difference in attack that we currently don’t have,” Walmsley said.

“He gives us the opportunity to play two up front, added height in the front third and like we saw in our pre-season match against the Wanderers, he is a real goalscoring threat.

“We’ve had the added advantage of getting Dan into the camp environment on our trip to Coffs Harbour and his character has been well received by everyone, he’s a good fit for us,” Walmsley said. 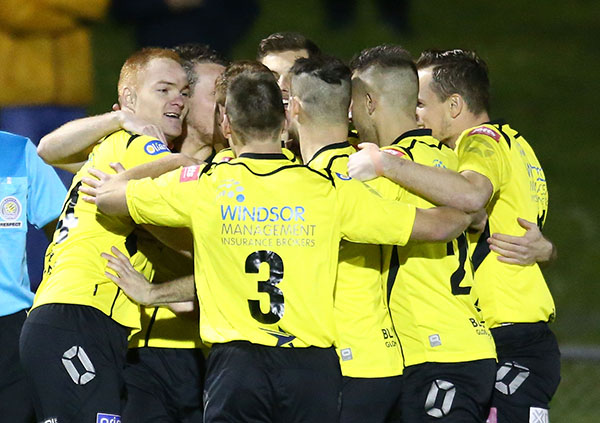 Heffernan spoke exclusively with ccmariners.com.au about the belief Walmsley has shown in him and his determination to score goals for the Yellow & Navy.

“I’m so glad that Tony has shown faith in me,” Heffernan said. “I’ve had people say to me that I could play full-time football but no one has actually taken the punt. Tony has seen something in me and gone with it so I am happy to be signing and thankful to Tony for the opportunity.

“There’s a good mix of players [at the Mariners] between the more experienced boys and the core of younger lads. ‘Hutch’ [John Hutchinson] filled me in on what the Mariners are about, as well as the area, it all seems like a really good fit for me.

“I’m looking forward to getting into the full-time environment to not only improve my fitness levels but also my sharpness and being able to learn from guys like Roy [O’Donovan] so I can bring my goal tally with me and improve on that.

When asked about his hat trick against the Wanderers, Heffernan remained humble and was quick to deflect the credit to his Mariners’ teammates.

“I went away happy but when you play with players who can put you in a position to score it makes a big difference, so as much as it’s my name as the goalscorer, I don’t like to take credit,” he said.

Dan Heffernan is set to link up with the Mariners today for a pre-season camp.