19-year-old midfielder, Adam Berry has put pen to paper on a contract extension that will see him remain a Central Coast Mariner until at least the end of the Hyundai A-League 2018/19 season.

Berry has impressed during pre-season and confirmed his future with the Mariners after signing his maiden professional contract with the club in May this year.

Making his starting debut in the club’s Westfield FFA Cup Round of 32 clash in the heart of midfield, the young gun has earned a reputation for his calm head in possession and relentless work ethic on the training track. 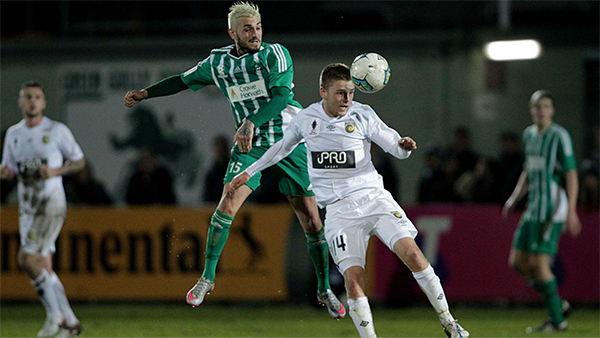 As a Foxtel National Youth League player last season, Berry made his Hyundai A-League debut off the bench in round 20 against Melbourne City and is proud to cement his future with the Central Coast Mariners.

“I’m over the moon to extend my contract with the Central Coast Mariners,” Berry said. “I can’t wait for the season and hopefully win as many games as possible.

“I’m loving pre-season, we have had a few hit outs against the likes of the Jets in Tamworth and to start to become more of a part of that has been great, so I’m looking to keep working hard and push myself to be there when the season starts.

Berry credited the tutelage of Mariners’ skipper Nick Montgomery and Assistant Coach John Hutchinson for his development this pre-season.

“Monty is great, I always talk with him and he always has time to catch up over a coffee so he gives me a lot of advice both on and off the pitch,” Berry said.

“Hutch has been great for me, he is hard on me at times but I know it’s always within my best interest and I love learning from someone who has played as many games as he has, he has done a fantastic job this pre-season,” Berry said.

Berry is looking forward to wearing the Mariners kit for at least the next three years and spoke about the importance of feeling comfortable on the Central Coast.

“You always love to have that security and to play in the A-League is something that I’ve always wanted to do, so to be here now with a longer term contract helps a lot but I also don’t want to get complacent, I need to keep working hard to try and win as many games as possible with the Central Coast Mariners.

“That’s the goal of everyone here, we’ve got a great group and you can see with the new boys that have come in that they’re here for the right reason,” Berry said.