The Central Coast Mariners are excited to announce the return of Championship winning defender, Josh Rose who has been added to the Yellow & Navy’s Hyundai A-League 2017/18 squad.

The Central Coast Mariners are excited to announce the return of Championship winning defender, Josh Rose who has been added to the Yellow & Navy’s Hyundai A-League 2017/18 squad.

Rose arrived on the Central Coast in 2010, where he managed 160 Hyundai A-League appearances with the Mariners. After spending the 2016/17 season with Melbourne City, Josh Rose has today completed his medical at the Central Coast Mariners Centre of Excellence and put pen-to-paper on a one-year-contract.

The 2010/11 Mariners Medalist knows what it means to be a Mariner, having been involved with the heartbreaking 2010/11 Grand Final but most importantly the club’s maiden Hyundai A-League Championship in 2013.

The pacey defender adds further experience to Okon’s defensive stocks alongside the likes of Alan Baro and Antony Golec and expressed his excitement to rejoin the Mariners family.

“I’m extremely happy to be back on the Central Coast, and very grateful to be given the opportunity to wear the Mariners jersey again,” Rose said. “I can’t wait to get back out there in front of the supporters, family & friends again. This club means a lot to me, it’s given a lot to me in the past and I feel like I’ve still got a lot to give back to the club.

“I think there is a lot of very good talent in those young boys in the club at the moment, and I’m looking forward to working with them on the field and off the field to try and help develop their game to the best they can. I’m sure with Paolo in charge, they definitely have a massive future ahead of them,” Rose said. 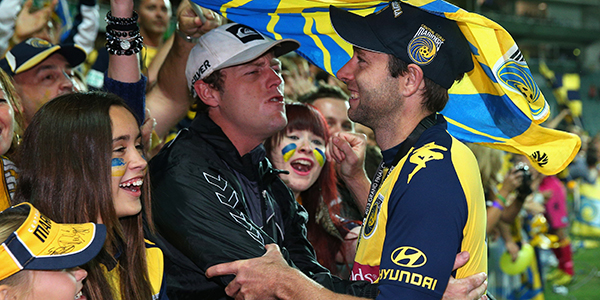 Head Coach Paul Okon is confident that the return of Rose will play a major role both on and off the pitch as a mentor to the younger players in his squad.

“We are of course very happy to bring Josh home,” Okon said. “Josh has a big role to play at the club both on and off the field – his experience will be a big asset to the club, especially with so many new faces coming in.

‘Rosey’ will be jumping straight back into the community space coaching at the Mighty Mariners Football Clinics starting Wednesday this week. The clinics will be three action-packed days of football fun, held at Central Coast Stadium for boys and girls aged 5-12.

“I’ve got three sons myself and I know what it means to them when people they look up to give them their time,” Rose said. “For me to come back and do that in the community is something that I look forward to doing, I enjoy doing it and I can’t wait to get out there,” Rose said.