Thanks to impressive lead up play which resulted in classy goals to Danny De Silva and Asdrubal, the Central Coast Mariners leave Spotless Stadium with a 2-2 draw against the Western Sydney Wanderers.

Despite taking the lead twice and dominating majority of the match away from home against the Wanderers, the Mariners were forced to settle for a point in a game where they could easily have taken all three.

Spanish striker Asdrubal maintained his reputation as one of the most dangerous and quick-striking attackers in the Hyundai A-League with his second goal in as many appearances which was complimented by an outstanding piece of play that saw De Silva bag his maiden Mariners goal. 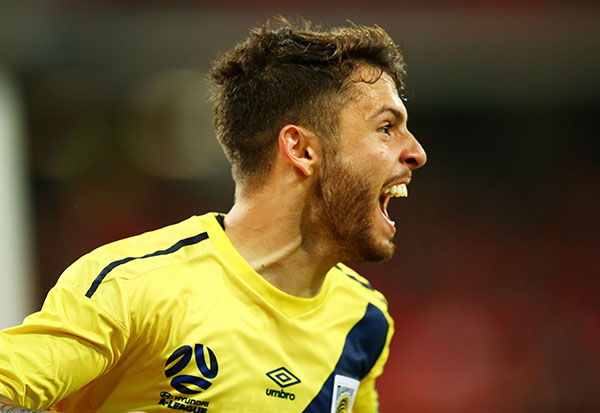 The match ended with 10-men after Andrew Hoole was shown his second yellow card in the 86th minute, However, the send-off should not sour the incredible performance of Hoole who played a major role in both of the Mariners goals on Saturday night. A proud Mariners debut performance for Hooley.

In the opening 30 minutes of play the Mariners starved Western Sydney of possession boasting almost 70% of the ball. Across the full 90, the Mariners ended up with 60% of the ball, a lot of that in the Wanderers area.

Although the Wanderers looked dangerous on the counter, their clearest chances of the first half fell to Riera in the box. The Wanderers’ Spanish striker let rip at a venomous strike but Tom Glover made a very sharp save to keep his side on level terms.

The Mariners continued to pressure in the front third and had to wait until the 20th minute to take a first-half lead. Storm Roux & Andrew Hoole combined on a crafty attack and Asdrubal was hunting the ball that he fired home from close range.

15 minutes later, Connor Pain had a prime chance to double his side’s lead after running onto a precision Josh Rose through ball. Pain steadied himself to shoot but Vedran Janjetovic stood tall to make the save.

Then, two minutes later at the other end Wout Brama was tracking back and made contact with Roly Bonevacia who was awarded a penalty. Glover dived the right way but Oriel Riera’s penalty was too tight in the bottom corner.

Both teams went into the sheds on level terms, shaping for an enthralling second half.

15 minutes into the second half, Hoole made a surging run into the 18-yard-box. With players screaming for the ball on both sides, Hooley threaded the needle to a charging Danny De Silva who found possession and chipped home with one of the tidiest finishes you’ll see.

Incredibly, Danny De Silva’s run started from well inside his own half and was timed to perfection.

Sit back & enjoy ? Here's a small taste of what to expect from Danny De Silva ? What about that ball from Hooley? ? @FOXFOOTBALL #ALeague pic.twitter.com/IRb9iG0qyH

But 10 minutes later the Wanderers hit back when a cross from Josh Rison on the right found the feet of Bonevacia who finished from inside the box.

Play heated up in the final twenty minutes with cards being shown to both sides, but neither team could break the dead-lock.

Danny De Silva was awarded man-of-the-match honours before travelling back to his former side, Perth Glory next round for a tough away trip in the west.

21’ ASDRUBAL GOAL: The combination on the right-hand side through Roux & Hoole paid dividends in the 21st minute and Asdrubal was there to fire home. Roux created space on the right and played the ball to Hoole who did well to beat his man before shooting. Hoole’s shot flew off Janjetovic and Asdrubal picked up the seconds to double his goal tally for the Mariners.

39’ RIERA GOAL (P): After a contentious penalty decision Riera stepped up to the spot. Glover moved well to the left and went agonsingly close to making a save but the strike was tucked into the bottom corner.

60’ DE SILVA GOAL: A moment of absolute class gave the Mariners the lead. Hoole burst forward down the right then up the middle. Hoole went up the middle and found De Silva who made an exceptional run. Still with plenty to do, De Silva composed himself to chip home a very tidy finish.

69’ BONEVACIA GOAL: Risdon made a run down the right and whipped a dangerous ball into the box. The ball found its way to Bonevacia who fired home from close range.

"I fell in love with him when he was 16. He's back to show why he'll be a world class footballer one day."

Paolo in the press

“I think it’s a game we should have won,” Okon said. “There’s a little bit of disappointment in the end but I am really proud of the players and their response after last week. The work they put in during the week was tremendous.

“When you come here you know if you don’t perform or you’re not on your game you are going to leave here with a few in the back of your net. So, credit to the players and we’re just a bit disappointed that we didn’t take all three points.

“Are you asking me if I’m surprised about Daniel’s performance? ‘cause I’m not surprised. He’s a world class player and we are very lucky to have him with us. He’s worked really hard to get to where he is today in terms of his fitness. We know what Daniel brings and we’re fortunate because we see it every day at training.

“If he [Danny] performs like that consistently all season, I don’t think we will be talking about it or anyone will be surprised because everyone will just expect it.

“I don’t want to whinge about it [refereeing decisions] it’s done. The important thing for us is focusing on our response after last week. I don’t know how many teams will come here and perform like we did today.

“We were excellent, we played some good football. We’re an exciting team and once we can get that ball moving we’re going to be very difficult to stop. For us, the important thing is can we do it consistently? We did it away from home tonight in a place that’s very difficult to come.

“We’re off the mark now, we’ve got a point. We have a tough away trip next week against Perth but we’ll go there and look to bring back three points,” Okon said.