On a cold night in Canberra the locals were treated with eight goals across two games, four of those were scored in the space of 35 minutes by Josh Bingham,

The Canberra locals witnessed a four goal thriller in the first game at Woden Enclosed with both teams trading punch for punch through-out the Yellow & Navy’s clash against Capital North Select.

Jordan Tsekenis was the stand out performer for the home side who scored a brace before being substituted off to a standing ovation.

A cool and calm penalty finish by Roy O’Donovan along with an impressive strike by Kwabena Appiah saw the match finish all square at 2-2 that proved to be a tough pre-season hit out for the Mariners.

The best news story to come from the night was the miraculous return of Storm Roux who featured in the starting XI for the first time since his horrific injury in Feburary that has kept him sidelined since.

Roux played out the entirety of the first match, much to the delight of not only Mariners fans, but football fans across Australia and New Zealand.

16’ TSEKENIS GOAL: A defensive lapse resulted in Capital Football North scoring the opener, Tsekenis was on hand in the 18-yard-box to pick up possession and fire home.

38’ TSEKENIS GOAL (2): Tsekenis was in the right place at the right time to double his tally for the night, picking up possession just outside the 18-yard-box he fired past Necevski who had no chance from point blank.

63’ APPIAH GOAL: After lodging a continuous barrage of attacks on the Capital North goal, it was Kwabena Appiah that finally broke through. Appiah picked up possession just outside the area and fired home from inside the box to equalise.

A cold Tuesday night in Canberra was lit up by Josh Bingham who scored four goals in the final match of the Yellow & Navy’s double header against Capital South Select.

The first half ended scoreless until Bingham pulled the trigger on an impressive strike from outside the area that opened a floodgate of goals to the young striker.

‘The Josh Bingham show’ continued throughout majority of the second half that ended in a four goal haul and all round dominant performance in the nation’s capital.

Another success story of the night, along with Storm Roux was the return of Jake Adelson who played the entire first half to mark his return from an ACL injury that he incurred in December last year against Perth Glory. 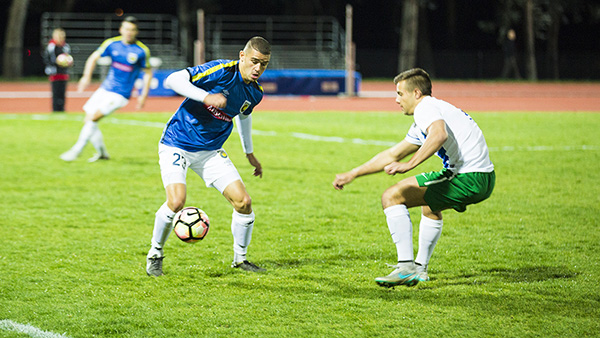 47’ BINGHAM GOAL: After a scoreless first half, Bingham took the match into his own hands and pulled the trigger on an absolute screamer from outside the area. His strike flew into the side netting for a 1-0 lead.

67’ BINGHAM GOAL (2): It was a second half brace for Josh Bingham that sealed a win for the Mariners in Canberra. He was in the right place at the right time for his second that he flicked home from close range.

70’ BINGHAM GOAL (3): Once ‘Bingaz’ got going, no one could stop him. The big numner nine had his hat-trick just moments later with a powerful header.

72’ BINGHAM GOAL (4): During stoppage time of the match that ran 35 minutes each half, Josh Bingahm made a craft run to beat a defender before slotting his fourth goal into the side netting.