All Junior Footballers on the Coast will receive F3 FREEBIES!

The local football season is upon us and to celebrate we’re giving all junior football players on the Central Coast a special certificate that includes freebies for our last home game against the Newcastle Jets on Sunday April 9.

All kids who play football (from under 5s to under 16s) from all 24 local clubs, Soccer5s and Central Coast Mariners Academy will be awarded with a certificate by their coach to align with Central Coast Football’s opening round, a way for the Mariners to reward the kids that chose football!

The F3 Freebies certificates are currently being distributed to all junior coaches and feature three exclusive offers for the #F3Derby to be played on Sunday April 9 at Central Coast Stadium.

The offers include a buy one get one free ticket offer, concession offer at the Central Coast Stadium food vendors as well as a voucher to redeem a FREE LIMITED EDITION Mariners Player card on game day in Gosford. 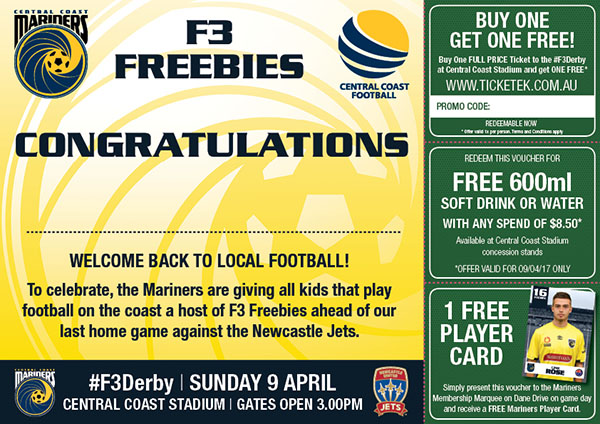 Don’t forget to bring your ball! Everyone will be able to join us for a kick on the hallowed turf of Central Coast Stadium after the full-time whistle!

What else is happening on Game Day?

It’s an action-packed game day planned for Sunday April 9 that will not only see us take on the Newcastle Jets but we will also be giving away a brand-new Hyundai thanks to our match day sponsor, Booth’s Motor Group.

We are also excited to be hosting the league’s first Legends Challenge between former greats of the Central Coast Mariners and Newcastle Jets to ensure our season ends with a bang!

That’s right! The likes of former Mariners greats such as Patrick Zwaanswijk & Mile Sterjovski will do battle against former Jets players in a curtain raiser kicking off at 3:30pm. Entry is included with your match day ticket or Mariners Membership.

CLICK HERE to find out how you can win a brand new Hyundai.